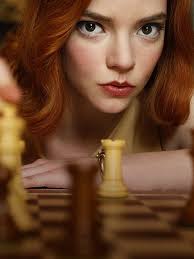 Along with some 100 million viewers we watched The Queens Gambit this past year. The title refers to the opening sacrifice Beth Harmon, the aspiring queen of chess, offers the Russian world chess champion. It also has a metaphoric meaning for a young woman whose life has been filled with the many sacrifices she has endured or chosen. This week, the festival of Purim celebrates another master chess player. There are more than a few parallels to consider between Beth Harmon and Esther, the hero of the Purim story. In the Netflix series we are given details of Beth’s back story but only a sketch of Esther’s history is provided in the Bible. Both are orphaned early in life and are buoyed by a relationship with a benevolent man who takes them under their protective wings. Later in life, both ascend, through competition, to become the respective queens of the chess world and the Persian Kingdom. Esther, as it is so for Beth, visualizes many moves ahead. While Beth sees chess pieces configuring on the ceiling, Esther plots out the course of her moves in the political machinations of the palace. Both women are offered a draw—the Russian chess champion extends his hand across the board to Beth and the Persian King offers Esther half the kingdom. Both women refuse the offers and play on to their respective victories. They have come too far to settle.

The Queens Gambit brought me back to a story I have reminisced about many times in our Kabbalah study. Unlike the ancient mariner, I don’t wear a chess piece around my neck. I choose to retell this story from yesteryear because of a newly discovered meaning.

Background: My father was an avid chess player and taught me to play when I was four years old. I carried as a young boy the story, though unverified, that when my father was in college and playing chess for his university team, he matched wits against Donald Byrne and won. Later in life I understood the significance of that win. If you google The Greatest Chess Game of the 20th Century it will be a game featuring Donald Byrne and his opponent, the then unknown 13 year old, Bobby Fischer. I have not held on to many things from childhood but one that I do cherish is my father’s chess set—unique in that the color of the pieces were yellow and red. Passing on the family tradition, I taught my children chess and my sons, who were far more talented than I, took up the game. They played chess for their school team and when the opportunity arose they asked if I would take them to play in a tournament.

Serendipity provided a tournament as the National Scholastic Chess Tournament was to be played in Denver. Despite their newness to the game they wanted to participate and so, along with some two thousand elementary school children from across the U.S., they sat down at their assigned chess boards, made their first moves, and pressed down on their clocks. There is not much to do while the games are being played except to huddle with hundreds of over-anxious parents awaiting the return of daughters or sons to congratulate or comfort them on the outcome of their games.

I noticed an announcement for parents to sign up for a chess tournament. I had never played in a tournament (or with a clock) and wanted to feel what it was like for my sons to play tournament chess. I sat down nervously for my first game and noted that the Dad sitting opposite me seemed even more nervous than I. The game ended quickly. His disappointment at losing was palpable– and I wondered how my sons dealt with their opponents’ losses? There was not a long break between games as the parent tournament was scheduled to be completed in one morning. I sat down to greet my opponent in round two. If you lost a game you were eliminated and a quick glance at the man sitting across the board filled me with angst. He seemed quite confident, with a smirk that belied chess intelligence. I blundered early in the opening and lost a knight.  While not ready to resign, I felt resigned to the outcome and to my very short lived foray into the world of competitive chess.

With accepting defeat an odd thing occurred: I began to play chess! What had I been doing up to that point? Later on it became clear to me—I was trying not to lose. I wondered if that was not the case for most of the young players, including my sons. Were they playing chess or were they focused on the outcome, trying to win or at least trying not to lose?

Back to the game: Typically, there is not a lot of banter during a chess match but as we continued our game I heard my opponent say under his breath, but loud enough for me to register, “Postponing the inevitable.” I am not sure what happened from there but I remember seeing a bead of sweat forming on his forehead a few moves later. When the game was over a feeling of exhilaration washed over me—not because my opponent resigned but because I had played with abandon—I had truly played chess (I lost in the next round to the eventual winner of the tournament but I gained an important insight) .

In the afterglow of that experience I was inspired to add another dimension to our teaching in the Soul curriculum on how the infinite can be “held” in the finite. Up to that point the lesson we had been learning from chess was the quantitative aspect of infinity–how many different games of chess could be played (approximating infinity). It is indeed remarkable that chess, with so many rules and a confined set of squares can generate such a large plexity of possible games. What interested me from my encounter at the chess tournament was the qualitative aspect of infinity—what is called “flow” which I had entered for a few short, transcendent ticks on the clock.  In accepting defeat, I was no longer playing out of fear (of losing). It was as if chess was playing through me. I did not check the clock—I was in an altered state of the infinite present moment.

The master teacher of mindfulness, Jon Kabat-Zinn writes this about chess:

“Chess is in essence not the pieces or the moves, but what emerges when highly skilled players interact with the rules of the game. Knowing the rules doesn’t give you chess. Chess is tasted in the playing, when you really know that universe through total immersion and the interplay of minds, a set of agreed-upon rules, and the board and pieces, and the possibility of learning. None by itself is chess. All are needed for chess to emerge. We love to see what emerges, again and again, and again, because you never know. That’s why the game has to be played.”

I retell this story because until I read this description by Jon Kabat-Zinn I did no fully grasp the qualitative aspect of infinity. As Kabat-Zinn offers–chess is a conduit for the “interplay of minds, the possibility of learning.”  What I discovered on that day was what one chess match offered me–a game of pure abandon and enjoyment, when words need not be spoken and infinity dwells on a sixty-four squared board. Sometimes accepting a draw is the best choice. But life is not about settling when you can see chess pieces dancing on the ceiling, change the course of history through the courage of taking a risk or have the epiphany of a spiritual awakening.

“the infinite can be held in the finite”–how much I as a woman have felt this–in pregnancy, in menstruation, and even in aging, as I generate anew in my garden, as a friend, and in my vocation of spiritual counseling. We hold it tenderly and trustingly.

I’m not used to commenting but it seems to me that living my life mindfully, can be compared to a chess game. Or perhaps many chess games. Somehow, Winston Churchill keeps sitting on my mind!!! Lura Williams

PrevPreviousYou Might Not Live Through This
NextMy Spiritual JourneyNext