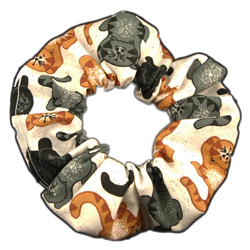 I could have observed this scene anywhere, but it happened at our Rosh Hashanah Service—punctuating the opportunity to see it in the context of repentance and starting a new.

A young girl was off with her friend playing and they decided to put their hair up in scrunchies.  The imprecision of eight year old hands led to a scrunchie crisis. Mom was enlisted to help extricate hair from scrunchie and even her efforts led to more entanglement. The scissors were brought out as a last measure. I noticed Mom starting to cut her daughter’s hair and realize that there was another way–releasing the entanglement by cutting through the scrunchie and sparing her daughter’s beautiful hair.

It was one of those quiet heroic moments of parenting—unnoticed and perhaps unappreciated by her child. Beyond marveling at the Mom’s in the moment ingenuity, I wondered how often I consider disentangling myself by removing the object rather than cutting off a part of myself.

The challenge with our relationship to “sin” is that we often want to remove ourselves from that “spirit of foolishness” that entered us (the words of the Rabbis regarding sin).

Self flagellation and body mortification are just two methods employed akin to the cutting of one’s hair to disentangle ourselves from sin. The Kabbalah suggests a different approach which is based on the Jewish teaching that a persons’ sins can be engaged with and transformed into positive energy.

As a starting point, here are the words of Jonah Gerondi from the 13th century:
“The repentant sinner should strive to do good with the same faculties with which he sinned. With whatever part of the body he sinned, he should now engage in good deeds. If his feet had run to sin, let them now run to the performance of the good. If his mouth had spoken falsehood, let it now be opened in wisdom. Violent hands should now open in charity. The trouble¬maker should now become a peacemaker.”

Disentanglement then occurs out of a commitment to transform negative energy into positive energy. This idea finds further expression in Rabbi Soloveitchik’s essay on Elevating Sin.

“By sinning, a person discovers new spiritual forces within his soul, a reservoir of energy, of stubbornness and possessiveness whose existence he has not been aware of before he sinned. Now he has the capacity to sanctify these forces and to direct them upward. The aggression which he discovered in himself will not allow him to be satisfied with the standards by which he measured his good deeds before he sinned.”

On Yom Kippur next week, we shape our hands into a fist and beat our chests above our hearts when reciting our confession. This act though is not an act of self mortification—we are tapping into our hearts not pounding our chests.

May we merit disentangling ourselves from the notion of needing to excise sin. Bow the head slightly, don’t scrunch the body and open the heart.

We were also strangers.

by Melanie Gruenwald Transformative Kabbalah reminds us to pay attention to seen and unseen reality- to connect the finite to the infinite, and recognize how they are each held in the other. In our Soul