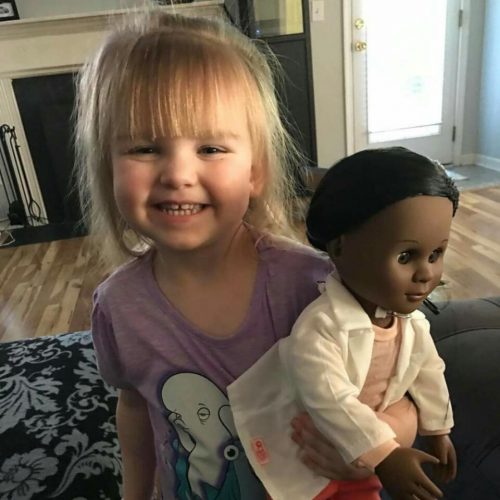 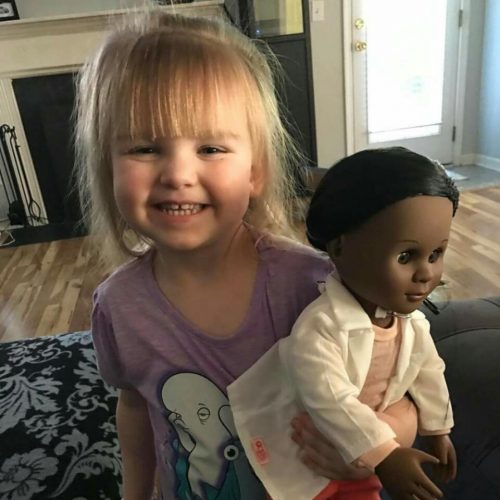 In contemplating the theme for this summer’s film class, it was noticeable that there was a plethora of Academy Award nominated films whose stories focused on the lives of darker skinned people. From “Loving to Moonlight” to “Fences” to “Hidden Figures” to “Lion” (feature films) and “I Am Not Your Negro” (feature documentary).

Then this story appeared, and it became clear that in supporting our evolving into a human race we must educate that prejudice matters.

A few hours north of Charleston, two-year-old Sophia Benner entered the Target store in Clover, South Carolina to pick a prize for her graduating out of diapers. Her parents, Brandi and Nick, were not surprised that Sophia wanted a doll. She selected Doc McStuffins, a doll from the popular animated children’s show. This doctor serves toys that are in need of medical attention—Doc’s Mom on the show is a physician. Doc and her Mom have dark skin color.

When Sophia arrived at the checkout counter, the cashier asked Sophia if she was going to a birthday party, incredulous that Sophia would be choosing a dark skinned doll for herself. Her Mom was about to intervene when Sophia explained that she was picking this doll because like Doc McStuffins she was also a doctor and that like Doc McStuffins she also had pretty hair. Sophia’s Mom posted this story to Facebook with the concluding remark:

“We aren’t born with the idea that color matters.”

I am not totally late to the Black Lives Matter movement but like many, my prejudices steer me away from that which is uncomfortable—so I recommend reading the history of this movement (and Ta-Nehisi Coates’ between the World and Me).

and watching the short documentary,“ A Conversation with My Black Son.”

will include the film series:

Thanks giving holidays are ‘of color’ to our Native American brothers and sisters. Colorado has the largest populations of Native Americans,and we need to let them know that their sense of mourning on such holidays are noteworthy and that we will collectively ask for the text books our kids read to depict the real story as Native lives matter.]….By Sarah B Shear, The Conversation 11-16-2018
Print
Thanksgiving is an important time, when schools teach the story of who we are and where we come from as a nation.

My own students have told me about the Thanksgiving story they learned in school, which focused solely on the survival of the Pilgrims and the friendly meal shared with “Indians.”

In my research and experience as a teacher educator, I have found social studies curricular materials (textbooks and state standards) routinely place indigenous peoples in a troubling narrative that promotes “Manifest Destiny” – the belief that the creation of the United States and the dominance of white American culture were destined and that the costs to others, especially to indigenous peoples, were justified.

As we consider history and its place in our schools, it is important to ask: how do state-mandated history standards represent indigenous peoples in social studies education? And, in this season of “Thanksgiving,” should we revise our curriculum to be more accurate and culturally relevant?

Placing indigenous peoples in the shadows of the past
From late 2011 through early 2013, social studies scholars Ryan Knowles, Greg Soden, Antonio Castro and I conducted a thorough study of state-mandated K-12 history standards across all 50 states and Washington, D.C.

READ: How Advertising Shaped Thanksgiving
We found 87 percent of the standards placed indigenous peoples in a pre-1900 context.

In other words, these standards confined indigenous peoples to a distant past.

This pre-1900 time stamp is significant because the turn of the 20th century saw increased American military conquests of indigenous lands and peoples as the country expanded west toward the Pacific Ocean.

But the standards rarely, if ever, present these events and the loss of life and land from the perspective of indigenous peoples.

Other scholars have written about similar findings in their research.

For example, University of North Carolina-Greensboro’s Wayne Journell found that 10 states – California, Georgia, Indiana, New York, North Carolina, Oklahoma, South Carolina, Texas, and Virginia – conclude their coverage of indigenous cultures and histories in US history standards around the “removal policies” of the 1830s.

Our research on curriculum standards also found that while most states included the Indian Removal Act, many excluded any consideration of the consequences to indigenous peoples related to their forced removal.

Prentice Chandler, who researches race and racism in social studies education at the University of Cincinnati, articulates the problem of placing indigenous peoples in the distant past, in the following way:

The treatment of American Indians in history texts pushes them to the fringes of the story: Native Americans are seen as having cordial relations with whites, being obstacles for Manifest Destiny, and eventually succumbing to white progress, never to be discussed again, as though they never existed.

Perpetuation of stereotypes
Along with controlling when indigenous peoples are included, standards and textbooks also dictate how their experiences are told.

Historians Clifford Trafzer and Michelle Lorimer found that California social studies textbooks failed to include critical content about the kidnapping, rape, enslavement, and murder of indigenous peoples during the Gold Rush era of the mid- to late-1800s.

The texts instead focused on the exciting lives of American pioneers who traveled West in search of wealth.

In yet another examination of textbooks published between 1991 and 2004, social studies scholar Tony Sanchez found that although the quantity of content related to indigenous peoples increased over time, the quality – in terms of how accurately cultures and histories are represented – is lacking.

For example, Sanchez found most descriptions of indigenous people’s clothing were stereotypical. Instead of including a variety of examples of cultural dress, the texts used generalizations, such as showing indigenous peoples wearing feathers and breechcloth.

Boarding school experiences
There are many other such glaring omissions.

My own research looked at how textbooks published between 2011 and 2013 wrote about the “boarding school era” – the period after the Civil War and into the 1900s during which the federal government used legal means to remove indigenous children from their homes.

Six of the eight textbooks I studied wrote that these education policies were peaceful reforms.

These texts presented, above all, the perspectives of white American reformers. These reformers believed boarding schools should be used to Christianize and educate indigenous children in the white American way of life.

READ: Thanksgiving, Lament, and the Story We Tell
The perspectives of indigenous peoples affected by this education policy were largely ignored. The textbooks did not include the stories of indigenous parents’ efforts to fight the removal of their children. Very few of the texts featured testimonies from indigenous children themselves – either positive or negative. There was little discussion of the lasting effects of these policies today.

Even when indigenous peoples were included in the textbooks, it was only as short, simplified sidebars or at the end of chapters.

Bringing this to Thanksgiving
Francis Rains, a scholar of Native American studies and history at Evergreen State College, and Karen Swisher, an education scholar and former president of Haskell Indian Nations University, have asked teachers to consider the following when teaching about indigenous peoples:

My own students, all education majors, regularly talk about how they learned Thanksgiving as children. We discuss how the story many of us grew up learning in school neglects the voices and experiences of the indigenous nations whose lands were invaded by Europeans, including the Pilgrims.

The late Michael Dorris, first Chair of Native American Studies at Dartmouth, articulated the problem with Thanksgiving in this way:

If there was really a Plymouth Thanksgiving dinner, with Native Americans in attendance as either guests or hosts, then the event was rare indeed. Pilgrims generally considered Indians to be devils in disguise, and treated them as such.

This Thanksgiving, let us hear and learn the story of indigenous peoples – their past, present and future – through their voices and not through the voice of Manifest Destiny.

This article is republished from The Conversation. Read the original article.

Do see the movie – Green Book-
When Tony Lip (Mortensen), a bouncer from an Italian-American neighborhood in the Bronx, is hired to drive Dr. Don Shirley (Ali), a world-class Black pianist, on a concert tour from Manhattan to the Deep South, they must rely on “The Green Book” to guide them to the few establishments that were then safe for African-Americans. Confronted with racism, danger-as well as unexpected humanity and humor-they are forced to set aside differences to survive and thrive on the journey of a lifetime.

My husband and I took the Black Lives matter class. It is because we took the class, my white husband agreed to attend a black lives matter march with me, in Boulder CO. I was happy I took the class,as I ended up interviewed by 9 news, and was able to belt out a lot of poignant views and ideas I formulated in my experience of being colored in America. I wanted my husband to accompany me to Standing Rocks well as the women’s march in D.C. He did not want to get involved. I do think the classes with David really lifted the veil for my husband. We have been attending race matters events at various churches…for years. And some thing did shift in my husband.