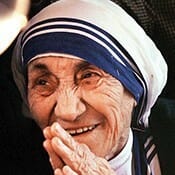 To play the devil’s advocate could there not be a few other alternatives? Perhaps not everything is miraculous but then some things are? Or perhaps miracles only occur when you really need them?

And then to the next dilemma. So which one of the two ways is Einstein advocating for? Leaving it open ended as two approaches to life would appear to give you a choice? Is this another Einsteinian relativity theorem that depends on your point of view?

The devil’s advocate started as a job—an official Vatican position with a 500 years old tradition to disqualify candidates for beatification and sainthood. It was and still is the role of the devil’s advocate of the Catholic Church to cast doubt on the character of would be saints and discredit miracles attributed to them to disqualify their candidacy.

For beatification you need one bona fide miracle—to be a saint you need two. Mother Teresa had one miracle sewn up in her locket—that miracle occurred from a locket with a photo of Mother Teresa on it. The reported miracle cure occurred from a light radiating from the locket that shrunk a cancerous abdominal tumor for a young mother in India in 1998. The devil’s advocate on this miracle, a medical doctor, claimed that the tumor was not actually a tumor, it was a cyst, and it was not cancer, rather the result of tuberculosis. The “miracle” he said was that the woman took her medicine and the cyst resolved. Pope John Paul II, after taking the devil’s advocate testimony under consideration, verified the miracle and so Mother Teresa was one miracle closer to sainthood.

Now, Pope Francis has cleared the way for her sainthood verifying her second miracle—a spontaneous cure for a young man in Brazil with brain abscesses that disappeared after the man’s wife prayed for Mother Teresa to intercede with God on his behalf. A devil’s advocate has not come forward to challenge this miracle (or at least it has not been reported).

The Kabbalistic tradition takes the relative position that “everything is a miracle.” It is confirming that Einstein presents this as one possibility and even more so that the spokeswoman for Mother Teresa’s Missionaries of Charity had this to say on learning of the good news from the Vatican:

The ultimate purpose for the “devil’s advocate” position may no longer be to discredit particular miraculous stories (of cures or other happenings), rather it may best be suited to advocate for seeing all life as miraculous, whether for the saint or anyone else. In this way the devil is no longer in the details, the devil’s advocacy is in the big picture—worthy of such a thinker as Einstein.

Priest Oscar Romero is to be declared a saint by pope Frances.
In his diaries, Romero wrote: “Between the powerful and the wealthy, and the poor and vulnerable, who should a pastor side with? I have no doubts. A pastor should stay with his people.” His sermons, demanding social justice for poor people and excoriating politicians and military leaders, reached hundreds of thousands of people via radio broadcasts.
The San Salvadoran Arch Bishop Romero,was martyred by a right wing death squad, for preaching “Liberation theology”. Liberation theologians argue that following the gospel requires not only belief, but also working for justice, exercising what Latin American bishops and later popes have called a ” preferential option for the poor”. He called for international intervention to protect those being killed by governmental forces, as a result he was assassinated on March 24th,1980.
His believers said that the church needed to push for political and structural changes to eradicate poverty. His murder came at the start of a 12yr civil warn which more than 75,000 people were killed and thousands disappeared.

Ten days ago the Catholic Church canonized Salvadoran Archbishop Oscar Romero.. For the ceremony, Pope Francis wore the blood-stained liturgical garment Saint Oscar Romero was wearing when he was murdered, on March 24, 1980. The day before he was martyred, the Archbishop had delivered a sermon urging Salvadoran soldiers to disobey the orders of their superiors:

“I call on the men of the army and the bases of the National Guard, the police, the military bases. Brothers, you are of our people. You are killing your own peasant brothers. The law of God –‘Thou Shall Not Kill’ – must prevail over an order to kill that a man may give In the name of God and the name of this suffering people, whose cries rise up to heaven, I implore you, I beg of you, I order you in the name of God: stop the repression”.

At the same time as the Canonization, an almost three thousand strong Caravan departed Honduras, headed for the United States. Men, women and children left, seeking peace and employment. Honduran cities and countryside have turned into killing fields of those who who aspire for a better life, of those who want to educate their children. Almost 40 years ago, Saint Romero asked that the repression against the people cease. The killings continued and everything indicates that the repression will not cease.

As in other regions of Latin America, the United States and the rest of the world, inequality, poverty and injustice are the order of the day in the Northern triangle of Central America: Guatemala, El Salvador and Honduras.

Meanwhile, as the pilgrims walked towards the southern border of the United States, the U.S. Secretary of State of the U.S. made a surprise visit to Panama and Mexico. In the case of Panama, he ordered President Juan Carlos Varela to halt his commercial negotiations with China. To the Mexican President (in his last month in office) he demanded that he stop the Caravan, which has already entered Aztec territory. The Hondurans do not intend to enter the United States unlawfully. The great majority seek refuge in the land of the “American Dream”.

Secretary Mike Pompeo knows very well the causes that motivated the Caravan. He well knows how and who caused the “humanitarian problems,” but all indications are that he has no idea how to control their effects. For more than 150 years the United States has intervened directly in the internal affairs of Mexico and Panama, as in all of Central America. The Caravan has its immediate origins in the 2009 coup d’etat in Honduras and the 2017 electoral fraud. The United States has spent more than a century and a half exploiting Honduras and her people. Whenever the people seek to establish order, Washington intervenes militarily and halts the development projects. Repression does not cease and the dead bodies pile up. The United States supplies the weapons, military training and finances for this barbarity. In the heart of Honduras lies the Northamerican military base of Palmarola, created to repress all Central American peoples, starting with Nicaragua, El Salvador and Guatemala. In the XXI century it has been turned into the central headquarters from where the Honduran people are repressed. Hondurans are also repressed in the United States.

The statistics show it well: thousands of peasants massacred, hundreds of Human Rights workers murdered and scores of journalists assassinated. Politicians in the United States call the victims of the massacres rapists. President Donald Trump ordered the United States-Mexico border to be closed and wants to mobilize the Northamerican army to detain what he demagogically calls “the invasion”. Will President Trump turn the United States-Mexican border into rivers of blood?

Will Saint Oscar Romero be resurrected, to ask the United States to cease the repression on her side of the border? Washington and the financial centers of New York steal the riches of the Honduran people. The banana enterprises, the timber industry, the sugar basins, the mining companies and other uncountable properties of Northamerican transnationals unceasingly extract Honduran wealth. The heavy military hand and corruption of the oligarchy caused the migration. Trump (and before him, Obama, Bush, Clinton and a long etcetera) shed tears before Northamerican workers, accusing the Central Americans of causing all their ills.

The Legacy of Liberation Theology
It has been 50 years since the Medellín movement changed history.
By Emilie Smith December 2018
Print

“THE CRY OF THE POOR rises to the heavens!” With one phrase, proclaimed at a conference of Catholic bishops in Medellín, Colombia, in 1968, history changed in Latin America.

Fifty years ago, the “princes of the church”—with the support of Pope Paul VI, who opened the gathering, and embodying the renewal of Vatican II—agreed to dethrone themselves. A “preferential option for the poor,” they said, would lead the renewed Catholic Church.

Bishops and priests, religious sisters and brothers, began working to change the historic structures of inequality and abuse that had existed in Latin America since the 15th-century invasion of the rapacious Spaniards. Faith was no longer held captive by the educated and powerful elites; now laypeople were empowered to make their faith their very own bread and Word. Christian base communities emerged. Theologians got busy listening “from below.”

A name was attached to the Medellín movement with the arrival of Father Gustavo Gutierrez’ groundbreaking book A Theology of Liberation. Liberation theology, rooted in the economically and politically oppressed, became the first modern theological movement to emerge in the Catholic Church outside of Europe.