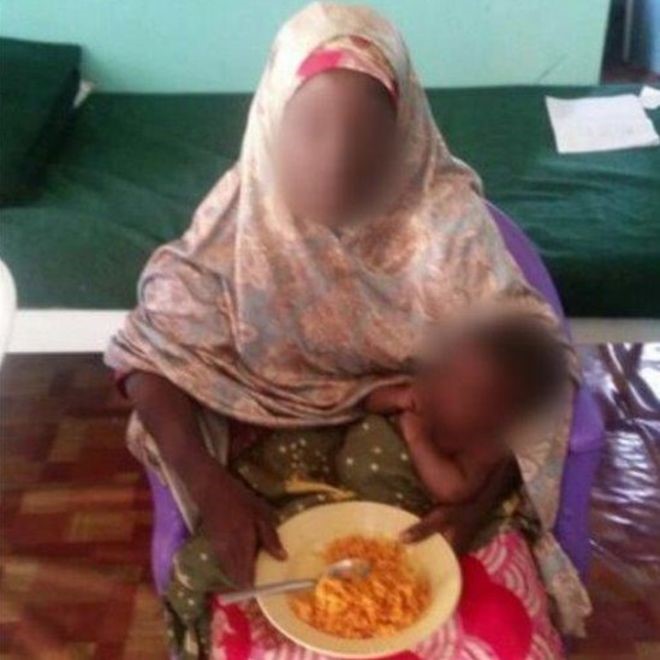 The names of these kidnapped Nigerian young women have been in our hearts and minds. Abducted from their high school in Chibok, they have been held captive by Boko Haram for more than two years. We have dedicated our High Holiday prayers to their welfare and Passover Seder for their release.  This past Sunday a woman who had received our Passover Haggadah was grateful to be reminded of the Chibok girls, as she said, “I had put them out of my mind and seeing the list reminded me of them.”

This week Amina Ali Nkeki, now 19 and with an infant child, emerged from the forest and was reunited with her family.  When she was spotted and rescued she was with a suspected Boko Haram fighter who is now in Nigerian military custody. He claims to be Ms. Nkeki’s husband. She is the first of the over 200 abducted girls, who did not escape after the initial capture, to be freed.

Amina is a Muslim name—for those who know Hebrew or Arabic the word Amunah translates from both languages as faith or trust. Amina reported that many of her fellow classmates are still alive (she knows of six that have died) and being held captive in a particular location. Perhaps Amina’s mother had faith that her daughter would somehow be freed but, along with other mothers, she has lost trust in her own government and the governments of the world to take action to rescue her child.  Now she has a grandchild, a claimed to be son-in-law and her Amina who has undergone the trauma her captivity.

My first instinct was to separate Amina from the list, but upon reflection she is still one of the Chibok girls—she is part of the fabric of our world’s inhumanity and indifference. Amina is forever woven into a garment that is symbolizes the hope that even if trust in humanity is not there, faith abides for the human potential of compassion and cooperation and an end to hatred and domination.

P.S. Write to Michelle Obama to speak up, again, on the need for action to bring back our girls

We must do everything we can to find and free the Nigerian girls.

BRING BACK OUR GIRLS

The story of a group of Chibok, Nigeria-based schoolgirls kidnapped in 2014 by the violent Islamic movement Boko Haram are the subject of an forthcoming film headed to HBO Documentary Films this fall.

Produced in partnership with BBC2 and ARTE France, Stolen Daughters: Kidnapped By Boko Haram tells the story of the girls’ time in captivity and follows their lives over the past year since their release.

Granted exclusive access to the freed girls who reside in a government safe house in the Nigerian capitol of Abuja, the film shows how these young women are adapting to life after their harrowing experience and how the Nigerian government is handling their re-entry into society. Stolen Daughters also chronicles the girls’ reunions with family who they have not seen since they were kidnapped, as well as them processing their traumatic ordeal through schooling and counselling.

Stolen Daughters showcases how the group of girls, known as “The Chibok Girls”, are required to live in a protected environment, where contact with the outside world is severely limited, and documents the girls as they move on to a residential, government-supported program at the American University of Nigeria.

The “Chibok Girls” fate is far different from the thousands of other women and girls taken by Boko Haram, who are known as the “Forgotten Girls.” Where Boko Haram still lurks in the northeastern city of Maiduguri, some of these girls’ share their disturbing stories of their abduction, treatment by the terrorists and their escape from captivity. Their ordeal isn’t over once they’ve escaped, many live in poor conditions in slums and refugee camps, abandoned by the Nigerian state, they are determined to tell their story and move forward with their lives.

Movie – Trafficked-2017-In this story inspired by real characters, three girls from America, Nigeria and India are trafficked through an elaborate global network and enslaved in a Texas brothel, and must together attempt a daring escape to reclaim their freedom.Sex trafficking is the 2nd largest industry. The industry made $100 billion in profits in 2017.That’s more than Intel,Nike,Google and Starbucks combined.The average age of entry into the sex trade is 14yrs old. The main point of entry for sex slaves in Colorado is at the I-70 and I-25 intersection. The University of Denver’s team of human rights advocates did pass a law at our CO State legislature, that sex trafficking is unlawful and illegal, and would be prosecuted.