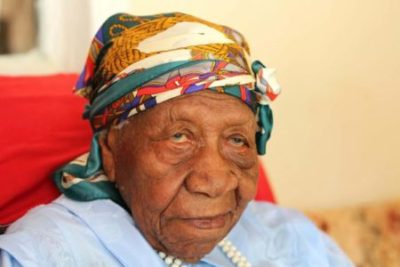 This exclusive club boasts no annual membership fee and has only one criterion— you remain alive.

Violet Brown of Jamaica was the eldest member of this club until her death last month at the age of 117. Predeceased by her son, Harland Fairweather, who died last spring at the age of 97.

In Jewish tradition the club is more exclusive—one could even say singular for recent history. It has been a long-standing Jewish tradition to wish people longevity—May you live to 120. In the last 120 years, only one supercentenarian reached that age, Jeanne Calment of France, who died in 1997 at the age of 122.

Some suggest that it is the lifespan of Moses of whom it states that he remained in full vigor despite his age. Others refer to an otherwise obscure passage in Genesis (6:3) that the destruction of the world was coming by flood and decreed that the remaining years for humanity (save Noah and his family) would be only 120 years. The days of a man of 120 years is connected in that verse to humans being of flesh—an allusion to the maximum stretch-ability of one’s physical existence to 120 years.

Martin Luther King, whose life ended before he turned 40, provides us with his final reflection on his own life:

“Like anybody, I would like to live a long life. Longevity has its place. But I’m not concerned about that now. I just want to do God’s will. And He’s allowed me to go up to the mountain. And I’ve looked over. And I’ve seen the Promised Land. I may not get there with you. But I want you to know tonight, which we, as a people, will get to the Promised Land.”

Both men, Moses and Martin Luther King, not only envisioned the promised land from their mountaintops, but they also forged the path and led their respective people to find their way to the promised land.

There are those who may live short lives and bring light into this world through their luminous spirit and radiant good deeds. Indeed, they not only see the promise, but they are also the promise, for us all—envisioning a land that shines from sea to sea.

Two such lights are Koby Gruenwald, our Halleluyah boy of Denver and Oliviah Hall of Ashtabula, OH, both youngsters who have cancerous brain tumors.

If you want inspiration watch Oliviah as she sings about hope at the Cleveland Clinichttp:

and Koby adapting the Halleluyah melody of Leonard Cohen to the Hebrew Psalms.

Is it the long life or seeing the promised land? Which is the club you want to belong?

P.S. In searching for words that equal 120 (in Gematria) the word “like days” (Ki-yamim) appears in verse about Jacob’s love for Rachel—that the seven years he worked to secure a marriage with her “flew by” and he experienced the years as a mere few days. One way to experience longevity is when time dissipates into the present—when the promise is love at this moment.