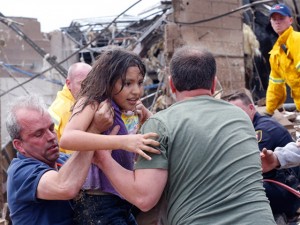 A mile wide. That was the center of this tornado. When nature strikes with such devastating force it rips lives apart—the death toll from this tornado was mitigated because some residents of Moore, Oklahoma built shelters after a 1999 tornado, of lesser force, killed 36 residents. Six people were saved by entering 94 year old Nancy Davis’ shelter—she built it after surviving the tornado of ’99.

The deaths and the devastation to lives permeated our classes today and this time it was nature, not human hands that was the cause for questioning whether or not events are random. Kabbalah posits that nothing is random.

As we were discussing this I began thinking what would be a good antonym to use for “random” and I drew a blank. I felt a bit better when I plugged in random in antonym finder and one of the definitions, among many, was nonrandom.

I wondered if any of these adjectives could be applied to the tornado’s path of destruction—and more specifically to who died or was injured and who survived. The tornado itself may have some fixed order to it but we certainly would not anthropomorphize and call it willful or purposeful.

The bottom line of the questioning in class can be simply put: Is it random that children in one elementary school died and in another they survived?

When we confront such hgh and motor skills suffering and loss it is not wise to invoke, in the name of any philosophy or doctrine an intellectual explanation; far better to remain in the question—and stretch out a helping hand.

I would though like to share an idea that emerged from our discussions. I will call it the nonrandomness of nonevents. Nonevents are always far greater in number than the events themselves. To cite a well known example: A meteor or asteroid that flies by earth without entering earth’s atmosphere, let alone impacting on earth’s surface. It is rare that a meteorite (what breaks off from a meteor) slams into planet earth, nonevents are surprisingly common—meteorites miss earth (or land in uninhabited areas quite often).

Turning our attention to the tornado that slammed into Moore we can reflect on both “events and nonevents.” If we call one random we must logically label the other random as well. Keep in mind that the nonevents in Moore far outnumber the events. Some of the nonevents received media attention –Nancy Davis and her tornado saving cellar was one-other nonevents included parents and teachers huddling with schoolchildren in bathrooms and watching cars and trucks fly over their text book covered heads. Last minute decisions to run this way or get in the car and drive that way led to many other nonevents. For those whose survival is a nonevent, the word lucky comes up often in their speech and for other survivors; the word that comes up is miraculous.

For every event there are exponentially more nonevents. What would you choose as the antonym for random?

The problem, of course, if “there are no accidents,” if events are not random, is that then they must be intended. Which leads to things like Flip Wilson’s line: “God’ll get ya for that.” After wrestling with this for many years, I concluded that these things are a consequence of God’s choice to give us free will. In order for us to function, the world must be predictable. When we drop a knife, or throw one, there should be a predictable way in which it behaves. Without the laws of physics, the chaos would paralyze you. But is it divine retribution if you fall a cliff and break something? No, it is a consequence of your choices. The choices in Oklahoma are 1) choosing to live in tornado alley, 2) choosing not to spend the money on an adequate storm shelter, 3) perhaps, choosing to ignore the warnings whether broadcast, or more subtle subliminal ones. So, perhaps, the opposite of random is “un-hoped-for consequences.”