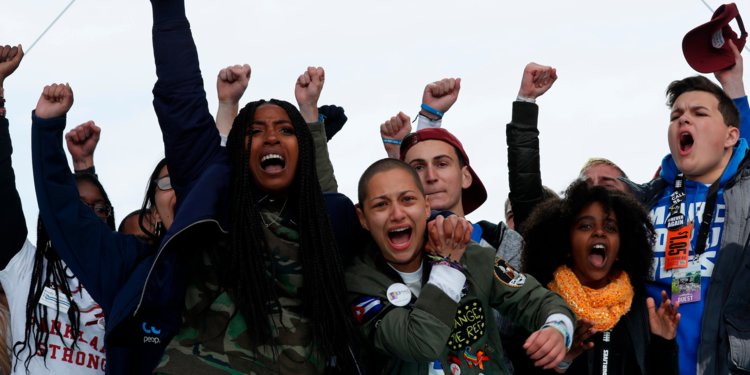 Awareness principle four: Live by setting intention. Be open to possibility—one door closing opens another. Measure success by effort not by outcome.

In the Tree of Life this awareness principle is connected with the Sefirah energy called Netzach-Hebrew for the words Victory and Orchestration.

Shaken by trauma, the students from Parkland set an intention that the murder of their fellow classmates would not just be another blood-soaked stain added to the litany of school shootings. Shaken but not silenced, shaken and stirred to set in motion demands for changes in gun access. They speak and use social media individually to keep the pressure on, but acted as a unit to orchestrate a massive protest and collectively they vow to not rest until change occurs that will (and would have) saved lives.

Netzach energy is about overcoming obstacles and seeking an outcome. What is meant by measuring “success by effort” and not by outcome is aiming for a goal while recognizing that it may not be realized right away or that it will need to be finished by others.

What we do have control over is our intention and effort. The Parkland students, many of whom honed their skills in Debate Club, are not backing down—they know both sides of an argument and can therefore articulate the possibility for a more reasoned approach to the freedom to bear arms alongside the freedom to go to about your school day without the fear of deadly weapons of mass

These are the 9 things that the Parkland students want government to do:

David, I liked what you wrote!The young people in our country are persistent, and will make the laws change on guns! Certainly the congress will do nothing! What a disgusting group! They just don’t care! But we must move forward, and do not be afraid! Thanks, Myra Rieger

Michael Morre’s two movies – Bowling for Columbine and Farenheight 11/9 both tackle the proliferation of guns and the high homicide rates in the U.S. He questions actor Charlton Heston on his support of the National Rifle Association.He talks to the Parkland students and show cases their courage in his latest movie. Dr Jordan Peterson,in his latest book – 12 rules for life – Quotes one of the Columbine duo who wrote,” The human race isn’t worth fighting for.Give the world back to animals. They deserve it infinitely more than we do. Nothing means any thing any more.” The Nazi’s came up with a “final solution to the Jewish problem… Kill them all. In comparison to what the Parkland students so confidently said, as they were being filmed on the national stage…They want us to get our own house as Americans in order before we criticize the world. They acted to correct the omissions in our dreadful gun laws. As young as they are…they are being authentic and standing up to making our world a less evil place to navigate.

If I sit next to a madman as he drives a car into a group of innocent bystanders, I can’t, as a Christian, simply wait for the catastrophe, then comfort the wounded and bury the dead. I must try to wrestle the steering wheel out of the hands of the driver.

Dietrich Bonhoeffer
This is want the students are doing…they are driving the winds of change now…AMEN.

The learning process is something you can incite, literally incite, like a riot.

There was a game that children in the southern Midwest played

during the early days of the Cold War. It was called, “What Time is it Mr. Fox?” It was a version of “tag” and went something like this.

We children gathered at the brick wall in the school yard. One of us was given the role of “Mr. Fox”, and that child faced the brick wall, hands on the wall and eyes closed. As the rest of us approached the wall slowly, one step at a time, we asked, “What time is it, Mr. Fox?” Mr. Fox replied

The idea was to get as close to the wall before Mr. Fox announced in a booming voice, “MIDNIGHT!” Then all the children screamed and fled before Mr. Fox caught one of us—that child then becoming the new Mr. Fox. We repeated the game again and again, the repetition of questioning and the exhilaration of flight. We reveled in the ritual of coming very close—but always escaping being caught at midnight.

Years later it became clear to me that we were enacting the anxiety we felt as our nation approached the likelihood of thermonuclear war and the oblivion of midnight. I remember the thrill of getting so close and then escaping at midnight. Each Mr. Fox helped us indulge in the fantasy that no matter how close we came, we might always get away.

Now, with the publication of Daniel Ellsberg’s new book, The Doomsday Machine: Confessions of a Nuclear War Planner, we must all admit that it’s midnight in America. Ellsberg gives one example after another of how close we’ve come to thermonuclear war across the last seven decades—and still we’re here, defying the apocalyptic consequences of midnight. Do we revel at the thought we have gotten away so many times by the “skin of our teeth”, as Thornton Wilde would say? Or have we sunk into denial of the impending catastrophe?—which means we have slowly become habituated and socialized to the idea of our inevitable destruction of our species.

Ellsberg traces how we got ourselves into this deadly game. Each step builds on and reinforces the last step until we approach the final step,

which Ellsberg calls “omnicide”—the annihilation of all humans and sentient beings we share the planet with. The first step was the gradual acceptance of killing civilians en masse as a war strategy. This idea took hold after World War I with the development of airpower capable of such mass killing. The second step was the urgency the US government felt to develop a nuclear bomb in the early 1940’s in order to thwart the greater evil of the Nazis. The third step came with the erroneous but widely held US belief that we won World War II by using a nuclear weapon, drawing the false conclusion that nuclear war was “winnable.” The fourth step was the accommodation of the US economy to a permanent state of war readiness and dependence on the production of more and more expensive weapons of war.

Ellsberg also indicates the steps we can take to end the terror of living under the threat of Nuclear Winter. First, Citizens must demand their representatives in Congress conduct hearings on the consequences of Nuclear Winter—following a thermonuclear war. Hearings on the subject have never taken place, although the fact of Nuclear Winter has been known for decades. Nuclear Winter is the inevitable result of thermonuclear explosions that drive smoke far into the stratosphere where rain never falls. Therefore, the smoke is left to circle the earth, blocking the light of the sun for years and causing the death of all human life and all

Second, citizens must demand that Congress initiate debate on the current U.S. thermonuclear war strategy—that measures our safety as a people on the basis of more thermonuclear weapons not less and which advocates greater dependency on the economic benefits that derive from the manufacture and maintenance of thermonuclear weapons. These topics ought to be the subject of on-going scrutiny and debate within the public at large. At present, the facts presented in Ellsberg’s book are hardly known by the U.S. public and even less discussed as a national conversation of urgent concern.

The Doomsday Machine is a sober assessment of our current thermonuclear strategy and a call for citizen engagement to challenge the authority of the political leadership that perpetuates it. Don’t read this book unless you’re willing to be disturbed. And don’t be disturbed unless you’re willing to take action to stop this madness. Otherwise, we’re just playing another round of “What Time is it, Mr. Fox?”

Vivbill@aol.com
I protested while at the university of Denver,to get our university students aware of the immorality behind the arms race and its build up during the Regan admiinistration. It was very clear to me that both governments were in this for the military industrial complex that were feeding the engines of growth in the wrong direction, and filling the coffers for the military elite in both countries…Daniel Ellsberg’s book is very timely. A must read for all of us.

Mark Tseng-Putterman, “The Armed and Anxious White Psyche: contemporary gun violence is not so much terrorism as tradition. It is deeply intertwined with the white supremacist foundations of the United States”
http://bostonreview.net/race-politics/mark-tseng-putterman-armed-and-anxious-white-psyche