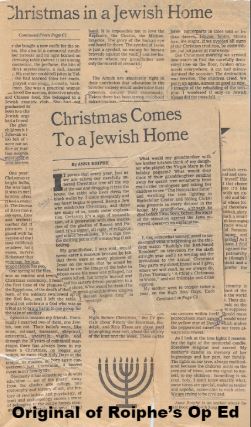 On December 21, 1978 an editorial in the New York Times by Anne Roiphe caused a stir in me and many others. Her topic was the celebration of Christmas in her Jewish home, choosing to celebrate it and not celebrate Hanukkah. At the time, Anne was married to a man who was not Jewish but the impetus for Christmas, with all its trimmings, had started in the generation before. Anne recalled the year her mother purchased a Christmas tree as she could not, “resist the bright bulbs, the artificial snow base, and the wax Santa Claus candles anymore. It was in our house a secular American holiday, about presents, that’s all. Still, it had a certain shine and excitement to it.”

With children of her own, Anne’s Christmas rituals waxed further into yearly traditions of eggnog and fruitcake, reading Dickens’ A Christmas Carol, enjoying the mythology of Rudolph and Kris Klaus and being entranced with the beauty of the Nutcracker Suite. Over time, Christmas in Anne’s home morphed from a secular holiday choice “to a sacred, holy time” for her family.

Why did she privilege Christmas over Hanukkah, or perhaps a question that lay dormant then for Anne, “Why not celebrate both?” Her answer appeared boldly in print: “As I approach the Jewish traditions I find old angers arising.”

What was stirred in me and many others as we read Anne’s piece was a rude awakening. There were Jews, Anne Roiphe prototypes, who were choosing Christmas as an alternative to their Jewish December holiday counterpart and it was neither an embrace of the majority religious culture nor, as her mother had succumbed, the effulgence of Christmas shine. Christmas gave meaning to her and a sense of sacredness and holiness that Hanukkah did not.

In the 38 years since Anne’s editorial much has been shared (including Anne’s own updates) on what is referred to as the December Dilemma. Families of multiple faith traditions continue to choose one or both winter holidays. Our neighbors this year, in a mild form of syncretism, erected a six foot Menorah wrapped meticulously with colored bulbs—a new take on the Hanukkah bush.

While Anne Roiphe was in the late 1970’s opening a window of understanding into identity diffusion, her contemporary counterpart, Katherine Ozment, a secularist from a Christian background married to a Jewish man, describes her recent experience of finding meaning in her family lighting Hanukkah candles amidst “an enormous dazzling Christmas tree laden with lights and ornaments just 10 feet away in the corner.” Ozment, author of Grace without God, was in search of furthering ritual and with her husband away, she and her children make shifted a Hanukkah candle lighting ceremony. In their collective ignorance of Hebrew, Katherine overcame embarrassment to share with her children the one Hebrew word she knew—L’Chaim. “It means,” she declared to her children, “To Life.”

With that word declared, and to punctuate her thesis, she and her children lifted their colored plastic cups and found grace (without God) in the sacredness of the moment they had created. “If I was going to celebrate anything,” Katherine mused, “it was going to be the crooked, imperfect path of life that I and my part-Christian, part-Jewish, mostly nothing family found ourselves on together.”

Separated by a generation, Anne and Katherine share a common bond. They were both seeking the sacred in the make shifting of ritual—Jewish Anne borrowing tropes from Christmas and Christian Katherine connecting with the melodies of Hanukkah.  They both found sacredness in the concrete rituals of the (religious) culture of the other, as they sought, in Anne’s words to enter the “spiritual” and in Katherine’s words “to find grace.”

Some may suggest that both of these women are confused, that in their rejection of their own religious or cultural traditions or in the syncretism of both, they are ignorant or worse, disloyal. A careful reading though highlights that it is their very confusion that leads them to seek a clarity that lies within and, at the same moment, beyond religious or cultural traditions. They are seeking the light that emerges when one make shifts, when one pays attention to an inner calling of the personal meaning in connecting with ritual and of personalizing ritual so that it does not reflect what one is instructed to do, but deconstructs ritual to its primal sacredness, “an awakening” in Anne’s words, or as Katherine suggests, “structured moments to connect with one another and with ourselves.”