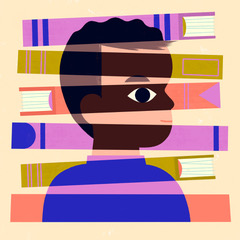 Have you ever driven by a billboard and taken notice of its message only to be told that the advertisement has been there for six months? Why do we take note of certain things and other things, in plain sight, escape our attention?

The documentary Social Dilemma provides one answer to the more recent phenomenon of how social media and internet browsers narrow our perception by feeding us the images, messages, and links it determines will keep us most engaged. All that amazing technological wizardry is refined daily in order to maximize you, the consumer, purchasing the goods it is advertising. You already knew much of what the documentary informs, what it surprises with is the degree to which the manipulation is carried out.

It is also common knowledge that humans stick with what they are accustomed to and comfortable with—whether that be products, people, or ideas. It is not just billboards we see or don’t see, our selective attention pervades our waking (and sleeping life).

There are times, and this is one of them, where you would have to deliberately turn away from the billboards in order to not see the message. But seeing the message and feeling the message are two distinct levels of awareness.

I have watched and shown the short film, by Geeta Gandbhir and Blair Foster, “A Conversation with My Black Son” dozens of times. It is part of our Human Narrative curriculum and I included it in this fall’s curriculum on racism. At first, I hesitated to show a film, that for some students, would be a second time seeing it. I was pleasantly surprised when a number of students similarly observed that on this second viewing they felt the pain of the parents in contrast to their first viewing in which they understood the challenges facing these parents.

I recommend you take 10 minutes and 10 seconds to watch A Conversation with My Black Son, a film on the New York Times OPDOC Series. That is how long it will take you to watch it twice.

From the directors:  For generations, parents of black boys across the United States have rehearsed, dreaded, and postponed “The Conversation.” But when their boys become teenagers, parents must choose whether or not to expose their sons to what it means to be a black man here. To keep him safe, they may have to tell the child they love, that he risks being targeted by the police, simply because of the color of his skin. How should parents impart this information, while maintaining their child’s pride and sense of self? How does one teach a child to face dangerous racism and ask him to emerge unscathed?