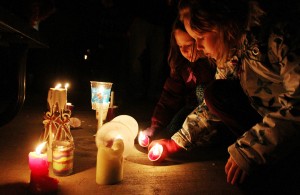 William “Dave” Sanders was a computer and business teacher at Columbine High School for 25 years, and coach of the girls’ basketball and softball teams. When the gunmen started firing outside the school, Coach Sanders ran to the cafeteria and sounded the alarm. Along with two school’s janitors he helped get more than 100 students out of the path of danger by herding them away from the shooters. He was in the upstairs hall trying to get students safely hidden in classrooms when he was shot from behind. He managed to get himself into a science where he bled to death waiting for help that 911 dispatchers told students who were helping him was coming, but never arrived.

Dave Sanders was the only teacher who died on that fateful day of April 20, 1999 at Columbine High. This past Friday, the sixth day of Chanukah, falling on December 14th –three teachers and three staff members of Sandy Hook Elementary School died while doing just what Dave Sanders did—protecting their students.

Stories will emerge about their heroism—shielding children with their bodies, standing in the way of the gunman and hiding children.

Among the heroines of this Chanukah story are teachers Victoria Soto, 27, Anne Marie Murphy, 52 and Lauren Rousseau, 30. Rousseau had been hired two weeks ago by Sandy Hook Elementary as a substitute for a teacher on maternity leave. Whether they had been with their “children” for a long or short time—they acted as parents whose love instinctually went to protect them.

Teachers, particularly of young ones hold the tender aspirations and dreams of their students. I vividly remember my second grade teacher, Mr. Cooper, who as much as my Mom and Dad, lifted me up to sense my self-worth. He was consistently kind and knew how to touch each one of us in a special way. I also had a teacher in first grade who was mean to me and many other children. This reinforces how important of the trust we all invest in our teachers.

At the funeral of Noah Pozner, the youngest of the children that were killed, his mother let us know that in addition to Noah wanting to be a doctor, he also wanted to be a taco factory manager. “It was your favorite food and no doubt you wanted to ensure that the world keeps producing tacos.” I do not know if Noah’s teacher is one of the dead, but I am sure that his teacher was supporting his dream of being a doctor or a taco factory manager.

One of my students today relayed that it is a wish of those families who suffered the death of loved ones that people learn the names and see a photo of those who died. It has been difficult for many of us to look at photos of those that died. If and when, and to whatever extent you are able, access the identities of those who died so young and those teachers and staff who readily sacrificed their lives to protect their students.

May we comfort those far and near who need comfort, including ourselves.

We will be on winter break until January 7th. Would people in our community want to gather for a memorial service for those that died? If so, please send us an email and we will choose a time.

I would like to gather for a memorial service for the Sandy Hook victims.

Let me know if it transpires

I will be out-of-town Dec 24-Jan 4 and I think it is a wonderful idea.