The Films in Our Eyes 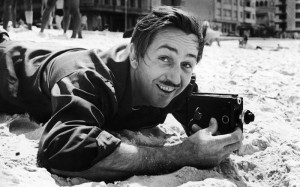 The first film I went to see was at a drive-in. It was the animated Disney classic Bambi. My mother has since recalled that I cried profusely when Bambi’s mother is killed. I don’t remember going to the movie or having cried but it certainly fits my knowing me. I cry at movies. I have a very vivid recollection of me as a 10 year-old sobbing while watching Charly, a film about a mentally disabled man who undergoes a surgery that radically increases his I.Q.

There is a line in that movie that became a quote for me, “I beat the mouse, I beat the mouse.” Charly, who is being trained to hone his new mental capacities, competes with a mouse as they negotiate mazes. He exhilarates when he is finally able to finish a maze before the mouse. Whenever I did something that I did not expect I could accomplish I would say, “I beat the mouse.”

An article in this past weekend’s New York Times magazine got me thinking about how influenced I and others are by fictionalized (and real) characters in films and books. Aunt Em’s admonition to her farmhand Hank (the Tin Man) to “not start posing now” as a retort to his proclamation that “Someday they’re going to erect a statue to me in this town,” echoes as a constant reminder to live in the present moment. My father’s admonition to me to, “not look back, we’ll turn into pillars of salt” echoes as well as a constant reminder to act ethically and have no regrets.

TThe feature article in the Times magazine is by Ron Suskin, an excerpt from his upcoming book “Reaching My Autistic Son through Disney.” Ron’s second son, Owen, appeared to be tracking a normal development when at age 3 it arrested. Owen became non-communicative and regressed in many other ways. Ron and his wife Cornelia felt that their boy had vanished. His diagnosis was regressive autism.

The life that is portrayed from then on is one of utter frustration over the loss of a relationship and a serendipitous realization that Owen was “ in there” by way of the animated Disney characters he watched over and again. What drove his parents (and brother Walt) crazy was Owen’s constant rewinding of scenes, sometimes a hundred times over. What was revealed though was that Owen was schooling himself in learning what others learn from real time, human interaction; he was learning it from the Disney characters.

One example: It’s Walt’s 9th birthday, September 1997, in our new house near Chevy Chase Circle. Owen is 6½. After roughhousing with buddies in the backyard at the end of his party, Walt gets a little weepy. He’s already a tough, independent kid, often the case with siblings of disabled kids. But he can get a little sad on his birthdays. As Cornelia and I return to the kitchen, Owen walks in right behind us.

He looks intently at us, one, then the other. “Walt doesn’t want to grow up,” he says evenly, “like Mowgli or Peter Pan.”

We nod, dumbly, looking down at him. He nods back and then vanishes into some private reverie.

It’s as if a thunderbolt just passed through the kitchen. A full sentence, and not just an “I want this” or “Give me that.” No, a complex sentence, the likes of which he’d not uttered in four years. Actually, ever.

From the on-line comments to the NY Times it is clear that Mr. Suskin has himself revealed a characteristic known, but perhaps not fully described, by many parents and professionals about children and adults with autism. They take in the world of actions, emotions and thoughts in a different manner than neurotypicals.

In this week prior to the holiday of Purim ( a holiday of masking and unmasking) the Suskin family story had me pause to consider how we formulate the masks and the stories related to them of our own lives—how much we are shaped by fictionalized characters and real characters.

My father would have turned 85 this week, his birthday is March 9th. He slipped quietly away, comatose for a long period of time, in November of 1990. But the film in my mind’s eye and in the deep recesses of my emotions keeps rolling. My Dad had the strongest hands of any man I have ever met (I felt them on rare occasion) and the gentlest touch (on more occasions). To be intimate with him was to experience his dark secrets and expansive soul, his fierce competitiveness and his loving embrace, his anger and his moral strength.

Like Owen we retain film clips and rewind them over and over again; we though edit them constantly. I came across a video of my father speaking to his congregation at the occasion of my youngest brother’s Bar Mitzvah. I was there but had little memory of the occasion and no recollection of any speech. There was my father, though, not as he appears in the film clips of my mind and emotions. The man in the actual film is a frailer man, his voice not as clear and resounding, even booming, as I remembered. He was the age I am now but already showing signs of the diabetes that would further debilitate his body and spirit.

The film clips are all stored and revisited, and edited based on prior experience. On occasion we can even rewind them as Owen does. Awareness suggests that the version we remember of the film, whether it be a Disney animation or of our lives, is the more potent one than the actual version. It is well worth a discussion with the film’s editor, fortunately he or she is close by.

P.S. For the full article by Ron Suskin: http://www.nytimes.com/2014/03/09/magazine/reaching-my-autistic-son-through-disney.html and imbedded is an accompanying video worth watching.