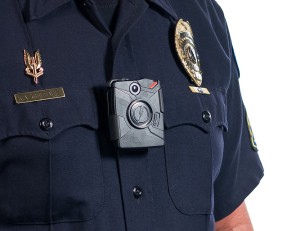 Those familiar with Malcom Gladwell’s book Tipping Point might recognize that technological advances are now tipping the scales of justice. It is a matter of time before every police officer in this country will be outfitted with a body camera.

Statistics do not tell a personal story but they do tell a collective story. Have you ever called one of those 1-800 numbers emblazoned on the rear of a vehicle to report your observations of HOW AM I DRIVING? The statistics are clear. Stickers on company vehicles significantly reduce traffic accidents. There are three components and potential explanations:

1. When you know you are being watched your behavior changes.
2. When companies receive feedback on a specific driver they can:
a. counsel them to improve their driving
b. terminate their employ as drivers

In a 92 page report commissioned by the U.S. Department of Justice similar points are made regarding the employ of body-worn cameras for police officers (click here to read the report). Two studies, conducted with control groups (officers wearing and not wearing cameras) provide convincing evidence that body cameras significantly reduce police use of force (up to 60% in these studies) and significantly reduce citizen complaints (up to an 88%) against police officer behavior.

The report concludes that:

“Providing a video record of police activity has made police operations more transparent to the public and has helped resolve questions following an encounter between officers and members of the public. Body-worn cameras are helping to prevent problems from arising in the first place by increasing officer professionalism, helping agencies evaluate and improve officer performance, and allowing agencies to identify and correct larger structural problems within the department.”

Body-cameras also impact those people the police are encountering. Ron Miller, Chief of Police, of the Topeka Police Department, puts it this way: “Everyone is on their best behavior when the cameras are running. The officers, the public—everyone.”

The tipping point for body-cameras comes from converging directions—reason and emotion. The logic is borne out by the studies and the statistics, the emotion is conveyed through the ongoing and more public scrutiny of the use of force by police, particularly with people of color.
As a spiritual learning community what lessons can we learn and what can we advocate for from a deeper reflection on body-cameras for police (and How’s My Driving stickers on vehicles)?

First is a powerful reflection on the body-camera we already have on, the one we wear every day—our eyes (and other senses). Imagine if at the end of each day we download the video of our day—we would clearly see our every move. We would see what we spend time on, who we spend time with, how others are reacting to us.

Second is a reflection on actually wearing a body camera—would that change our behavior? My guess is it would have a radical impact if we knew someone (whose opinion we care about) would be reviewing the tape. One of my teachers in High School used to try and quiet the class down by reminding us that we were all being filmed—his point was that we were being filmed by God. It was not very effective, but he did draw my attention to a greater awareness of how my behavior might look to others.

Third, and this gets to a layer of awareness that goes deeper than just behavior is how behavior is a product of our thoughts and emotions. For this the “camera” would not just be filming our actions, it would, if possible, be recording our thoughts and feelings. Imagine the review of that video/audio/sensation recording for police officers and for ourselves. Would we not discover our prejudices, our (over) reaction to things and our incessant internal chatter?

A final point: Will the use of body-cameras for police officers not only impact behavior but also impact beliefs and attitudes? Whatever the answer is does not detract from the validity of using cameras to reduce police force when not necessary and to perhaps create a more civil interaction from those the police are engaging with. It does though point to a needed ancillary “program” to accompany body-cameras (this in addition to reviewing behavior and providing feedback to police officers).

Would it be useful for a recording to go off as a police officer turns on his or her camera—an audio reminder prior to every engagement that spoke to the dignity of human beings, to the value of each life. Perhaps in the current milieu it could be the voice of Martin Luther King’s voice reverberating his message, “I have a dream.”