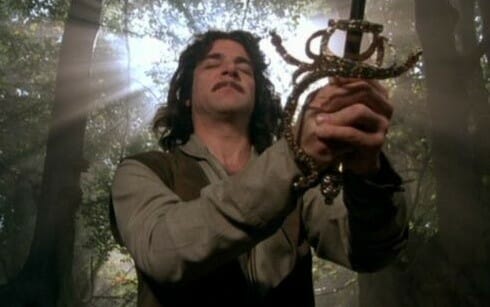 You Killed My Father: Prepare to Learn

Yesterday, a student sent her class a story she read about a young man, a football star who was adopted as an infant and his search for his biologic family. It turned out that his biologic father, who had not known that he had a son (the mother did not inform him she was pregnant) later recruited and then coached him for his football program at Miami University.  It is one of those heartwarming stories and what we playfully and meaningfully call a “Kabbalah Experience.” [For the full story on Deland McCullough click here: http://www.espn.com/espn/feature/story/_/id/24505521/the-jaw-dropping-story-nfl-coach-search-family]

Over this past year, I have blogged on the 11 Awareness Principles that serve as a foundation for our study at Kabbalah Experience. Awareness Principle #11 –the most subtle awareness is “Flow in the paradox of being and non-being in every moment.”  This awareness is associated with Keter—the Crown in the Tree of Life. Similar to the eastern Crown Chakra, Keter–the crown energy sphere–floats above the head—hovering above consciousness into the superconscious realms. Keter is “beyond thought” and yet is still connected to thought as we share those inexplicable moments with others such as synchronistic occurrences that are beyond our logical comprehension.

In appreciation for all our continued evolution in awareness, both individually and as a community, I want to accentuate a point that can be missed when we are moved by our own or other people’s experiences of serendipity and synchronicity. In a most brilliant use of metaphor, Julie Beck writes:

“The overstuffed crate labeled coincidences is packed with an amazing variety of experiences, and yet something more than rarity compels us to group them together. They have a similar texture, a feeling that the fabric of life has rippled. The question is where this feeling comes from, why we notice certain ways the threads of our lives collide, and ignore others.”

I pondered Julie’s question from another angle: “How does it help us with our spiritual growth to notice the way certain threads of our lives collide?”

Seeing coincidences as a part of some mysterious quantum entanglement or divine providence can fill us with amazement and awe. It can provide us with a framework, a structured meaning to what others would term happenstance or probability of coincidences due to the “Law of Truly Large Numbers.” How does it help with our spiritual growth?

I suspect that many of you have seen the Princess Bride or are at least familiar with the incessant refrain uttered by Mandy Patinkin’s Inigo Montoya: “My name is Inigo Montoya, you killed my father, prepare to die.”  Inigo, as a small boy, witnessed the murder of his father at the hand of a six- fingered man.  Inigo swears to avenge his father’ and kill the six-fingered man. As fate has it, their paths cross and Inigo’s life-long quest is fulfilled by the film’s end. In the final scene, Inigo, having fulfilled his youthful promise, ponders, in a poignant self-reflection:

“I have been in the revenge business so long, now that it is over, I do not know what to do with the rest of my life.”

Mandy Patinkin was 34 years old during the production of the Princess Bride. His own father died when Mandy was 20 years old. It was not lost on him at that time that the role of Inigo was both fiction and serendipitous healing for him.

Here we begin to see the power of paying attention to what shows up (the first principle of awareness) and its connection to revealing the masks we wear (the eighth awareness principle)  whether embodied in a fictional character such as Inigo or a role we play in “real” life. And then we can begin to have a further realization, the awareness of being and not being and the freedom to choose, to take on a different mask and the superconscious awareness that it is all mask—a flowing between being (a masked something) and non-being (pure awareness).

“Right at the end of the film, when I say: ‘I have been in the revenge business so long, now that it is over, I do not know what to do with the rest of my life.’ That to me is the line that mattered. I never realized what I was saying and then in my late fifties I heard the line(as if for the first time) and it became the real cornerstone for my life.  As a young man I think I was in a bit of the revenge business. And, you know, somewhere in the past 10 years, I stopped being so angry and started being a little more grateful, literally for the sunrise and the sunsets and my kids and my family and the gifts I’ve been given.”

Serendipity and synchronicity—if we listen carefully to the messages contained in the experience it helps us access crown awareness—helps us unmask even our quixotic quests and search for a meaningful life—to stop trying to control or avenge our wounds and let the love, generosity and beauty of sunrises and sunsets flow through us.

Purchase your own copy of the 11 Awareness Principles Poster