A Look in the Mirror 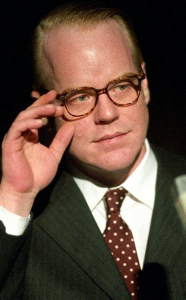 I thought of a trivia game (perhaps it is already on the market) where you have names of characters an actor played in films and you have to guess who the actor is. For instance, if the following sequence of names were read out loud, after which name would you guess Marisa Tomei: Natalie Hegalhuzen, Danika Merrick, Ida Horowicz, Mona Lisa Vito.

Try this one: Lancaster Dodd, Phil Parma, Caden Cotard, Lester Bangs. If the next clue was Truman Capote, and you had not guessed yet, most assuredly you would call out, Philip Seymour Hoffman.

In the many obituaries and testaments to Mr. Hoffman this past week there was one line from a film critic that caught my attention.

“At best, I have an image of him — an image drawn from seeing him onscreen — that affords me the illusion of having known him. But all it is, is an illusion.”

Contrast that with the following observation made in another article about Mr. Hoffman: “Actors are playing what we think we know about them as real people even as they are portraying a made-up person. And, through their accumulated roles, they are not just creating a body of work—they are telling their life story.”

So which is it? I would offer that the answer is “and.” Illusion and their life story.

According to Capote’s biographer and friend Gerald Clarke, Hoffman was more like Capote on screen than Capote himself. “Through the alchemy a very few gifted actors possess, he has done more than impersonate Truman,” he said. “For the length of the movie, he has resurrected him.” Hyperbole aside, Hoffman, as in the case for all of us, whether we are actors or not, choose roles that mirror for us the masks we need to contemplate.

Here is Philip Seymour Hoffman on his role as Truman Capote:

“What I was drawn to was the tragic tale. This classic tragic tale. Something being inevitable, something playing itself out and no one could stop it. There was something about that, which was very interesting to me and compelling. I think that what makes the film compelling is you can’t stop it and it’s so subtle and simple and kind of slow. It’s there and it’s lulling you and you realize that you are on this train toward this place. It’s inevitable and that’s, I think, something that makes for good story and a good film.”

As we often say in Kabbalah class: “Objects in the mirror are much closer than they appear.” So are the roles we choose.