The Manning Behind the Mask 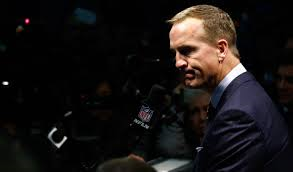 Growing up I had a collection of miniature plastic football helmets. They were my treasure.  I loved the colors and the emblems.  Most survived.  That was my football legacy, a dozen or so plastic replicas of helmets of teams I watched play during my childhood.  I gave the collection to my son as a gift.

This past Sunday Peyton Manning led his Denver Bronco team into the Superbowl . In the press conference following the game, Peyton was gracious enough to answer questions and talked about a lack of execution. He bristled only once when a reporter used the word “embarrassed” calling that term an insult. He looked dejected to me. Not an unreasonable affect for a man whose hopes for another Superbowl win eluded him and his teammates.

Whether you follow football, have never watched a game, or even find the sport repulsive, I recommend you watch The Book of Manning. http://www.youtube.com/watch?v=ChzLt_9llhc

I had not planned on spending my night with the Manning family but I wanted to know more about this man who has entered the life of our city. One of the mini-helmets I gave my son was colored gold. It has the emblem of the New Orleans Saints on it. They were not a very good team when I was a boy, but they had this talented quarterback named Archie Manning who passed on his football legacy to his sons. I was curious to know what the nature of that legacy was. I had in the back of my mind the question: Would the family history provide a clue as to why Peyton Manning might not execute as well in big games?

The answer I received is: You know nothing about this man or about his father (and brothers) and yet you were creating a story that might account for his performance. I can now attest that all I have is the utmost admiration for Archie Manning and the sons he and his wife raised. I admit that I do not know the whole the story—I know the story that is told. Yet there is a vibration that resonates beyond the roughhousing and competition surrounding the Manning football legacy. It is a legacy of love and overcoming loss.

Archie Manning came home one day to find his father lying in a pool of blood. He had taken his own life. Archie was 19 years old.

The following is a letter I would write to Peyton:

It is not so easy for people to shed their masks and really connect with each other. Until this moment I only saw you as a quarterback, a great passer and a tenacious competitor. I was inspired by the loss this past Sunday to find out more about you and watched The Book of Manning.

Not many athletes would risk coming back to such a demanding and aggressive sport following multiple neck surgeries. But you are clearly not just playing football, you are living out the dreams of your loved ones; your brother whose football career was cut short, your father who loved the game but played for a NFL team that was not a playoff contender and your grandfather that took his life and did not have the satisfaction of watching his son become a star quarterback in college and in the pros.

On the day of the Superbowl, people across the United States became aware that Philip Seymour Hoffman died in a drug overdose. Perhaps he committed suicide. His death leaves three children behind. I would like to suggest that you and all of us dedicate this Superbowl loss to the Hoffman children, especially his 10 year old son Cooper, with the hope that they all will one day grow into parents such as your Dad. For a child, especially a boy, the center of his universe is often the presence of his Dad. That is one snap in your family that was not missed. You have a father that communicates his love to you through the noise of everyday life. I am so thankful to your father, mother, you and your brothers, Cooper and Eli, for sharing the Manning story. I am thankful to you for coming to Denver. Win or lose, well executed or not, you are now far more than a football player to me. You are the man who passes on a legacy of love that emerges from loss. How many yards is that? There is no football field that can contain it.

Wonderful tribute, David. Not a big football fan, but I did see the Manning documentary some weeks ago and was so impressed by this family. I admit I grieved more over Phillip Seymour Hoffman than our super bowl loss. I have seen all of his movies–even the small parts. Manning’s and Hoffman–all great talents.

Thanks for sharing your thoughts. Hope that someone knows a way to share this blog with Peyton.

I think you should send the letter. Peyton needs to hear that win or lose, he has contributed much to many. As did Phillip Seymour Hoffman. The roles we play are such a small part of what we ultimately contribute to others. We admire a great athlete or a great actor in part because, through their talents and even their shortcomings, we expand our view of what it means to be human. That’s a connection that resonates with all of us.

Hi David!
I think that is such a great letter. I am not much of a football enthusiast but have watched almost all the games this year. Peyton and the Broncos
have given our entire family something fun to connect with on Sundays via togetherness at games, on Facebook and texts and have even had us remember
how much my dad would have been thrilled with the successful season.
Peyton is an exemplary athlete both talented and gracious and is a joy to watch.
Nonetheless, my oldest son said it best about the Superbowl–you have to be in
the moment. Forget they hype, the interviews, the noise and focus on being present in each moment. Perhaps for Phillip Seymour Hoffman the moment of pain overtook his better nature. I hope that all of us think about the moment, and then the one after.
Hanna

David: Wonderful! Hopefully, this will help people to think about their own legacy and what is really important.