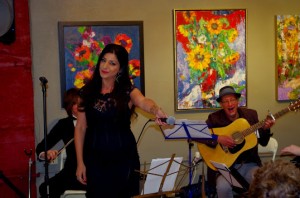 One day, a master asked her disciples the following question:

“Why do people yell at each other when they are angry?”’

“We yell because we lose our temper,” said one of them.

“But why yell, when the other person is right next to you?” asked the master.

“We yell to make sure that the other one hears us, tried another disciple.”

None of the received answers satisfied the master.

She then offered the following:

“Do you know why we yell at each other when we are angry? When people argue about something, their hearts distance one from another. In order to cover that distance they need to yell, so that they can hear each other. The angrier they are, the louder they are because of the even greater distance.

What happens when people are in love? They do not yell. They speak in a low voice, gently. Why? Because their hearts are very close and the distance between them is very small. Sometimes their hearts are so close, that they do not speak any more, they just whisper, murmur. And when love is even more intense, they do not even need to whisper any more, it is enough just to look into each other’s eyes and their hearts understand each other.”

Last Thursday night we celebrated as a community over 10 years of Kabbalah study. It was a magical evening, , a cool summer breeze, a full moon to the east, the band Zuruna with their lead Catrene Payan accompanied by Hal Aqua singing Hebrew, Arabic and English songs, and the painter Majid Kahhak capturing the moment in vibrant oils on a purple sunset canvas to the west.

There was much to be stimulated by, sights, sounds, smells, tastes and at the center of it all the connections of touch. At the end of the evening we auctioned Majid’s painting and the winning bid went to Lloyd Ford. She came up front and spoke a few words about how she felt welcomed in by our community—she wanted to not only hold onto the magic of the evening she wanted to express her thanks for being touched by the warmness and embrace she has experienced over the past three years. Later, she whispered into my ear a remembrance of a personal insight she had in class, an epiphany about the item she had held onto from her childhood.

What we learn in Kabbalah Experience is complemented by how we learn—openness to dialogue, input from everyone and how we configure the room for study or a celebration. It would be optimal if we could sit in a circle (working on this) but we create semi-circles, rectangles and squares of trust with the teacher in the middle—the configuration of the seating parallels the process of learning and participation of everyone. When you can see each other and be seen by others there is both vulnerability and opportunity for trust. People who trust each other are more likely to be loving. They are also more likely to yell in an effort to get back into relationship then to be right about their viewpoint. While yelling or soft tones often do make a big difference, the master could convey to her disciples that intention is of importance whether one speaks softly or one yells. While one works on their tone one also needs to pay attention to their intentions. In the words of the Animals (that’s the name of the band) that Hal Aqua and Catrene reprised for us: