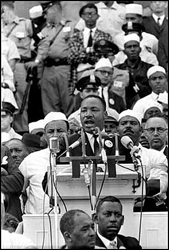 The mid-term elections this week expose “insufficient” language that serves to harm and divide our great country. It is not just the incessant language of rhetoric that divides liberal and conservative, democrat and republican—it is the insufficient language of color (some would call it race) that causes damage to the ideals of America.

As humans we will never be “color” blind, but it is time to be blind to color, or as Mia Love, the first elected woman Republican house representative, who is identified as “black” said: “This has nothing do with race. Understand that Utahans have made a statement that they’re not interested in dividing Americans based on race or gender that they want to make sure that they are electing people who are honest and who have integrity. That’s really what made history here. It’s that race, gender, had nothing to do with it, principles had everything to do with it.”

Mia Love was elected by “whites” (she chose to live as a Mormon and moved to Utah, meeting her husband Jason Love there and serving as Mayor in Saratoga Springs). The characterization that she was elected by whites is consistent with the language used in exit poll surveys that look at the skin color of people who vote for Democrats and Republicans.

Are we ready to embrace a new language, one that Love is asking us to embrace? Can we be blind to color? Being blind to color does not mean that color is not noticed. It means that we look beyond our assumptions and we start using sufficient language—we stop using the terms black and white or brown and white. I am not suggesting that we should ignore color issues—they are real and reflect deep prejudices, fears and mistrust. There are many lessons yet to be learned from the death of Michael Brown and what will occur after the Ferguson grand jury comes to its decision. Language though serves to maintain the way we see things—it can serve to change the dialogue or further mire us in an intractable divisiveness.

Here is an example of how we need to change and speak a sufficient language:

Language not only reflects “reality” it creates it. Imagine if we never had heard the words: “I have a dream”—those words are still actively influencing our reality—but they can be obfuscated by retreat into language that has never served the “dream.”

As a preamble to his “I have a dream” speech, Martin Luther King posed the following challenge to the American people:

“We’ve come to our nation’s capital to cash a check. When the architects of our republic wrote the magnificent words of the Constitution and the Declaration of Independence, they were signing a promissory note to which every American was to fall heir. This note was a promise that all men, yes, black men as well as white men, would be guaranteed the ‘inalienable Rights’ of ‘Life, Liberty and the pursuit of Happiness.’ It is obvious today that America has defaulted on this promissory note, insofar as her citizens of color are concerned. Instead of honoring this sacred obligation, America has given the Negro people a bad check, a check which has come back marked ‘insufficient funds.’”
It is time to for us to cash in our insufficient language for new words that guarantee the inalienable right of all humans to be seen for their true colors—beyond the color of skin.