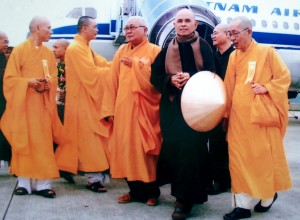 King Massasoit of the Wampanoag tribe was a man of peace. He welcomed the “white” settlers to his land. As a King he sold them land. Soon enough the settlers were so many in number they stopped buying land—they just took it. Native American leaders had choices—but those who could see ahead knew that their way of life, their sovereignty over a land they had lived in for millennia was threatened. Massasoit’s son Metacom, who had taken an English name (Philip) began a war against the settlers. The year was 1675. Metacom was killed in battle a year later—the settlers beheaded him and displayed his head publicly for some 20 years in Salem, Massachusetts.

Thich Nhat Hahn, the Buddhist monk, lays today in a coma. He is 88 years old and his community has asked those wishing him well to be mindful of his teachings. One of his poems is in our curriculum on Holding Opposites—and we have his own interpretation of these powerful words to guide us to their meaning.

I am the twelve-year-old girl, refugee on a small boat,
who throws herself into the ocean after being raped by a sea pirate,
and I am the pirate, my heart not yet capable of seeing and loving.

In Plum Village, where I live in France, we receive many letters from the refugee camps in Singapore, Malaysia, Indonesia, Thailand, and the Philippines, hundreds each week. It is very painful to read them, but we have to do it, we have to be in contact. We try our best to help, but the suffering is enormous, and sometimes we are discouraged. It is said that half the boat people die in the ocean. Only half arrive at the shores in Southeast Asia, and even then they may not be safe.

There are many young girls, boat people, who are raped by sea pirates. Even though the United Nations and many countries try to help the government of Thailand prevent that kind of piracy, sea pirates continue to inflict much suffering on the refugees. One day we received a letter telling us about a young girl on a small boat who was raped by a Thai pirate. She was only twelve, and she jumped into the ocean and drowned herself.

When you first learn of something like that, you get angry at the pirate. You naturally take the side of the girl. As you look more deeply you will see it differently. If you take the side of the little girl, then it is easy. You only have to take a gun and shoot the pirate. But we cannot do that. In my meditation I saw that if I had been born in the village of the pirate and raised in the same conditions as he was, there is a great likelihood that I would become a pirate. I saw that many babies are born along the Gulf of Siam, hundreds every day, and if we educators, social workers, politicians, and others do not do something about the situation, in twenty-five years a number of them will become sea pirates. That is certain. If you or I were born today in those fishing villages, we may become sea pirates in twenty-five years. If you take a gun and shoot the pirate, all of us are to some extent responsible for this state of affairs.

After a long meditation, I wrote this poem. In it, there are three people: the twelve-year-old girl, the pirate, and me. Can we look at each other and recognize ourselves in each other? The title of the poem is “Please Call Me by My True Names,” because I have so many names. When I hear one of these names, I have to say, “Yes.”

As we reflect on our world and the terrible violence we see “out there” we must remind ourselves of this teaching of Thich Nhat Hahn. Beheadings are part of our own history here in America—religious intolerance was present then as well, not just simple greed. The powerful could dictate, could impose their will by force, much as they are now doing in Syria, Iraq and Nigeria under the banner of Islamic jihad.

Hahn is not addressing (though he implies his own point of view) whether his philosophy of non-violence would extend to not saving the girl at the cost of the pirate’s life. For those who would advocate saving the girl and even more, proactively “degrading” pirates or jihadists from their path of violence, it is all the more important that we recognize that we share names—we carry those baser instincts in our DNA and those wrongs (hurtfully imposed on others) in our rituals and traditions. Are we thankful for the freedoms and democracy we have in America? So we celebrate this week our thankfulness for this country—and we remember the intolerance, the greed and entitlement that cleared the way for our great and at the same time, shameful nation.

The key though for our future is the last line of the stanza in Hahn’s poem, “my heart not yet capable of seeing and loving.” We have the capacity to see more, to love more and to stop our violence (in all the forms it takes including the prejudices we carry) against one another. The pirate may come to realize this as well. Regardless, we turn our heads in recognition when we are called by that name.