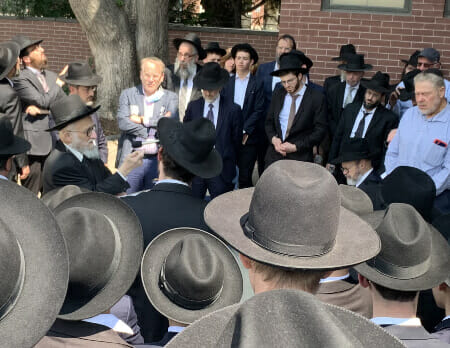 “And God said to Eve, ‘It is not good that you should be alone, I will give birth to a man so that you will have a companion.’ And God brought the man to Eve and she said, ‘I will call him, Partner, for God has given me the gift of companionship.’”

“And God said to Sarah, ‘Take your daughter, your favored daughter, Rebecca, who you love and bring her up to Mount Moriah and offer her there as a burnt offering on one of the heights that I will point out to you.”

In the continuation of these stories, we can imagine Eve and Sarah acting differently than their male counterparts in the Biblical narratives. After partaking of the fruit of the Tree of Knowing, Eve chooses not to disclose to Partner that she had eaten the fruit so as not to tempt him into disobedience. God admonishes Eve for her actions and is moved by her compassion. Instead of banishing the first couple from Eden, God offers them the path to the Tree of Life.

Sarah, knowing that this is a test of her moral character, replies to God, “Did you not promise me this long awaited daughter, who I have suckled at my breast, and loved with every fiber of my being? Are you not a God of compassion who showed our Mother Eve the path of Life? Take my life if you must, but I will not offer up my precious, innocent daughter.”

On the holiday of Rosh Hashanah both of these Biblical narratives take center stage in the liturgy.

Rosh Hashanah is a commemoration of the creation story, specifically, the introduction of humanity on the sixth day of creation. The promise of human potential is tested from the outset: Will humans be one with nature or will they betray that trust and take matters into their own hands? Knowing (from that Tree) in this context means adopting a dualistic premise in the pursuit of independence and abandoning the underlying commitment to the unity of self and other. Eve and then Adam seemingly fail the test as an ultimate lesson for us to choose the Tree of Life.

Why has it been a tradition to read from the Torah the story of the Akeida—the Binding, in which Abraham takes the knife in his own hands to fulfill God’s demand to sacrifice his son Isaac? The Rosh Hashanah liturgy itself provides this answer: “Just as Abraham, our father, suppressed his compassion for his son, to do your will. may your compassion suppress your wrath against us, and may your mercy prevail over your attributes of strict justice.” The lesson though turns out to be a paradox because Abraham in the end sees that he should have defied God’s request. Unwittingly, Abraham, by sacrificing his own moral compass, instructs us to choose Life.

These musing are a preamble to moving from the biblical stories to the tragic murder this week in Denver of an innocent young man, Shmuely Silverberg. It is the same week that many have died, senselessly murdered or killed. Shmuely was eighteen years old. One moment he was exiting the doors of the Yeshiva where he studied in West Denver, the next moment he lay fatally bleeding from gun shot wounds. A senseless murder.

The next morning Rabbis, students and community members gathered in the street, Shmuely’s body already placed in a coffin by their side, to express their grief, and to eulogize their fallen brother. There were those that cried out at the injustice, and those that shared their incredulity: “We don’t know why, we don’t understand.” The Rosh Yeshiva (Dean of the Academy) was the first to share words, a mixture of Hebrew, Yiddish and English. His words were meant to console, to provide a reason for what is unfathomable. I have heard these words many times before: “God needed a sacrifice, one without blemish, an atonement for our shortcomings.” Shmuely, the Rabbi was arguing, was a sacrifice that God needed to atone for the sins of others.

The lesson from the Akeida-The Binding is the opposite. God neither needs nor wants human sacrifice. That is the conclusion we are to derive from the narrative as presented in the Torah. We may not fathom the why of a senseless loss but that much we can understand. May the community and Shmuely’s family grieve their loss and find the strength to go on, to choose Life.