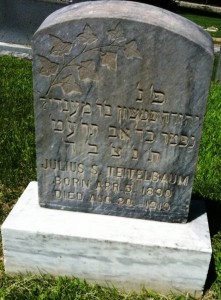 A month ago I received an email from a woman I knew when I was a boy. She was my older sister’s best friend. She lives in Israel—close to my sister as neighbor and close in the friendship they have for nearly a half century. Mirel is her first name. It took me a minute to realize that it was she that was writing me and letting me know she was contemplating coming to Denver this summer and could I help? The following is her story and request.

My request to you is twofold:

1.  If you have any information about her great-uncle Julius Teitelbaum who lived in Denver (he worked in a clothing store) a century ago, please let me know.

2.  If you can join me and Mirel at the graveside service next Wednesday from 6:30-7:00 pm please let me know (Fairmont Cemetery is on the corner of Alameda and Quebec streets and the Temple Emanuel section is on the west side of the cemetery off Quebec).

Some­time over a cen­tury ago, a young man left his home in Zborov, Hun­gary to fol­low his older brother to the shores glistening with the promise of the Amer­i­can dream.  Born about 14 months apart, the two boys must have been close.  I can pic­ture how the younger brother pined for his brother; how he must have longed for the adven­ture and the free­dom!  It is easy to under­stand him fol­low­ing his brother to the Amer­i­can shores. Only there is no trace of it.

Wherever I looked, my great-uncle Yehuda eluded me. That only intensified my sense of his calling out to me.  I thought that by find­ing the date of his death and his final rest­ing place, I could rest at peace know­ing that I’d solved the enigma that obsessed my grand­mother for years.  And yet, he con­tin­ues to beckon, pulling the string as it twists this way and that, teas­ing me, dis­tract­ing me–not let­ting me rest until I find another piece of the puz­zle

We knew he was buried in Den­ver.  And we assumed that ativan causing palpitations he’d died in Den­ver, because he was sent there to con­va­lesce after being injured on board ship dur­ing his mil­i­tary ser­vice in the First World War. So I now began to won­der if the story wasn’t sim­pler than I’d thought.  If per­haps after his injury he just went home and died there.  But then this week, while try­ing once again to deter­mine whether Yehuda, or Julius as he was known in Amer­ica, had served in the Navy or the Mer­chant Marines I found yet another doc­u­ment:  A death cer­tifi­cate issued in Brooklyn, NY.

I was begin­ning to pull my hair in frus­tra­tion.  Yehuda’s only known rela­tive in the United States was his brother in New York.  So if he died in New York, why wasn’t he buried there?  Why was he shipped back to Den­ver where he had no one to mourn him?

Well, it seems that, as usual, life is com­pli­cated.  Four months before Yehuda died, Annie, his sister-in-law, gave birth to her third child, her first boy, named Char­lie for his father because some months before Char­lie was born, his father died.

And so, in August of 1919, my great-uncle Yehuda’s body was shipped to Den­ver and buried far from his fam­ily.  For 94 years, his fam­ily knew only the fact of his death and of his bur­ial in Den­ver.  His Eng­lish name:  Julius S Teit­el­baum.  The Hebrew date of his pass­ing:  the 24th of Av.  We know that he was buried in Temple Emanuel at Fair­mount, 430 South Que­bec Street.  Bur­ial Plot: 11–04-SN.

So now that this is prob­a­bly the last time I will be in Amer­ica I would like to make sure that this year, for the first time in the 94 years since he died, his mem­ory will be hon­ored with a minyan to recite the spe­cial prayers for the ele­va­tion of his soul.