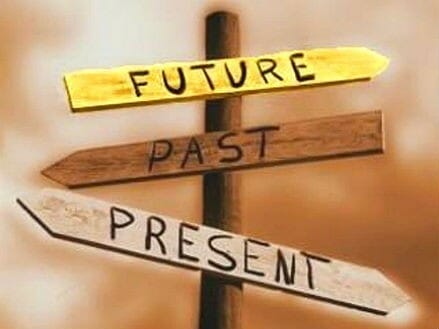 If Not Now, When?

If it was simple to be (fully) present “now” would we need so much instruction on how to be in the moment?

Kabbalah places our relationship to time at the foundation of our awareness practice. Being fully present is an integration of past, future, and present as exemplified by the ineffable name of God, which though not pronounced, speaks of: “is, was and will be.”

On the standard Mental Status Exam, a person is evaluated on their alertness and orientation—and it is determined whether they are “oriented x 3″—to person, place and time. The “person” question refers to knowing who they are (name). Place is an orientation to the dimension of space (location) and time to knowing the year, month, and day or to knowing about “current” events. If the person has transported themselves to another dimension in space or time or does not recall who they are, we say they are not oriented and know that something is altering their brain function.

To transition back to our topic of being present, we are always “locating” ourselves in space and time—we are standing on this corner, we are in our car heading west toward the mountains, we are sitting on our couch, which is in our living room, which is in a city we call Denver, which is in a land mass we call North America, on a planet we call Earth, a part of a solar system in a galaxy we call the Milky Way.

To locate ourselves in time we are also standing on a corner on a Tuesday morning, or heading west in our car on a Sunday in the winter, or sitting on our couch (as I do) early in the morning (writing a blog). It is a day we call Tuesday, which followed a day we call Monday and precedes a day we call Wednesday, in a month we call February, in a year we are designating as 2018.

Each of us has our personal orientation to place and time. While a visitor might call to say, “I am at the intersection of so and so streets,” you would call that intersection “home.” Another intersection may have one meaning for one person (the spot they fell in love) and a different one for another person (the spot they were hit by a car). The same applies to our personal (or communal) orientation to time when it comes to a designated day such as a birthday or anniversary or a holiday on the calendar. Even seasons are not generalizable, the summer solstice depends on the place you find yourself on this planet.

What then is “this moment” in personal orientation? There is the larger “was” of this incarnation-from womb to birth to childhood, adolescence, and adulthood, and the more compact “was” of what happened yesterday or a moment ago. There is the larger “will be” of the future which is impacting this present moment—doing something now in preparation for the planned event in the future and the more compact “will be” of what word I will use to finish this thought.

This moment. At the intersection of past and future; fully present to where we have been and where we are heading and the liminal time in-between.

In your looking at your past and future consider how they are at the intersection of your present moment—your past has brought you here to this moment, it influences but does to define you and your future is calling to you—influences you as well but not defining you.

“Most of these students are so conditioned to success that they become afraid to take risks. They have been taught from a young age by zealous parents, schools, and institutional authorities what constitutes failure and success. They are socialized to obey. They obsess over grades and seek to please professors, even if what professors teach is fatuous. The point is to get ahead, and getting ahead means deference to authority. Challenging authority is never a career advancer.”
― Chris Hedges, Empire of Illusion: The End of Literacy and the Triumph of Spectacle
Kids in the here and now need to take risks and learn from their mistakes.
If not now, when? – A book written by Primo Levi – A true story of his struggle to stay alive, while wracked by fear, hunger and the germane army. Our children are in a different kind of zone where risk taking is not encouraged and grades are more important. I encouraged my children to think out side of the box. To read beyond just there text books,and question every thing. And to be interested in every thing that came past their way,as that made life an adventure. Young people love any kind of odysseys.

Wise Words
“We didn’t launch this campaign because I thought I was special or unique or better than anyone else. We launched this campaign because in the absence of anyone giving a clear voice on the moral issues of our time, then it is up to us to voice them. We launched this campaign because no one was clearly and authentically talking about issues like the corrupting role of money in politics, like the disturbing human rights violations being committed by ICE, by the fact that no one was giving voice to the notion that an entire generation is graduating with crippling loads of student loan debt, a ticking time bomb for our economy. No one was talking about these issues. And when no one talks about them, we have the duty to stand up for what is right.”

—Alexandria Ocasio-Cortez, who, at 29 years old, has become the youngest woman ever elected to Congress.