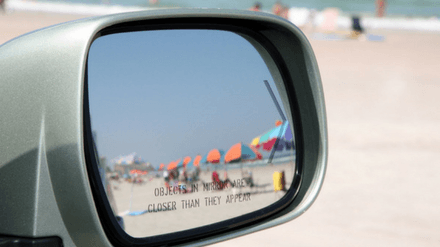 Objects in the Mirror

Over the next 11 blog posts, we will look at one of the 11 principles of awareness, which we link with the Sefirot of the Tree of Life. We start at the bottom and work our way up—ascending in awareness.

The most basic awareness principle is to pay attention to what shows up—which includes who shows up. At this level, we may not be asking the how and why questions—just noticing the what and the who.

A practice easily developed is to receive the message: “Objects in mirror are closer than they appear” and carry it with you, as a mantra, on the road you travel, the lanes you cross, and the exit ramps you take throughout your daily life.

Physicists explain the need for the imprinting of this message on the passenger side mirror because of the angle and distance from the car’s driver—the convexity of the mirror lessens the size of the blind spots and at the same time diminishes the size of what is viewed. Our brains interpret size as a measure of distance—the smaller an object the further away it is—hence the warning.

But why choose the word “objects” and not “vehicles?” What objects other than vehicles would be closer than they appear? Perhaps that is why the lesson from the message placed on this mirror is so well understood as a metaphor, as a teaching tool for awareness.

Entering the practice of awareness

To enter the practice of awareness, first, take a good look in the mirror to see who and what is showing up—these are the lessons for your growth. Even those “objects” that appear small and further away require your examination. They are much closer than they appear.

What showed up in my mirror this past week was the offer of a free ping pong table, an unexpected and profound conversation with a neighbor, a student’s unresolved grief from fifty years ago, a question about what is beyond thought, stubbornness in the face of another’s immaturity, immaturity in the face of another’s stubbornness, autoimmune diseases, not getting Hamilton tickets, and the list goes on.

There are so many objects that pass by my passenger side mirror, some whizzing by so fast it would be dizzying to recollect the makes and models of each. When it comes to the myriad of experiences, the whats and whos of this past week, I am admittedly a bit overwhelmed and yet very grateful for how each one reflects the growth in awareness that lies ahead.

Take time each day—or at least once a week—to reflect on the mirror of your life. This is the basis for all other awareness practice.

This was beautifully stated. I look forward to the remaining work. Thank you for your good works, Pamela

Read two wonderful books while traveling out of the country–“Tuesdays with Morrie” and “A Dog’s Journey”. Both focused on one’s view of life at the time of death. I was stunned that the last life of Bailey, the pup featured in “A Dog’s Purpose” and also “A Dog’s Journey” had him/her as a Hospice dog. My Golden and I do that here in Denver.

Reflection on the end of life: “You cant really live until you accept death”.

Standing Rock has been showing up for me. It took so many of our activist leaders like Jane Fonda, Shailene Woodley, Jesse Jackson,Leo Di Capris and Amy Goodman from democracy NOW,to show up to give voice to our Native peoples struggles at the North Dakota access pipeline.
Oct 10th is deemed indigenous peoples day in America, to celebrate the indigenous people of America.
I remember the years we would protest the Columbus Day parade in Denver,as Columbus never set foot in North America and yet was heralded as a founding father in this nation. Not to mention the genocide that was perpetrated on indigenous populations all around the America’s. 7 million people on the islands of Haiti and the Dominican Republic were massacred by Columbus and his compadres. I was over joyed when Columbus day in Denver was changed to Indigenous peoples day…as small victory for those of us who never gave up. May of us were jailed for our push back against an un true myth of conquest over an indigenous people by a fictitious Conquistador.
On Sept 6th 2017,hurrican Harvey made landfall and inundated the Petro Metro of Houston TX. Trump boasted that he removed us out from the Paris Accord in between the two hurricanes of deviating magnitude and force. He immediately focused his attention to the rebuilding of the Dakota pipeline even when there were massive demonstrations at Standing Rock. The $3.8 billion access pipe line was Trumps top agenda item. On the other side, you had the largest unification of Native tribes, who protested the pipe line to protect the 17 million people down stream,who were at risk of their water shed had there been any leakage.The water protestors were met with a fully militarized police force, and attack dogs were unleashed and people were mauled, pepper spray was added to sub freezing water which was sprayed on the protestors, rubber bullets hurt 100 people,and 700 people were arrested.
I watched a documentary on Jane Fonda and I was happily surprised to know that she spent her 79th birthday at Standing rock, and provided 500 people with thanks giving meals prepared by 50 chefs. The drumming circles kept on, and a head of several buffalos showed up at the pipe line, to the utter joy of every one present. Then a Golden Eagle made its landing among the elders who were seated. It was as if nature herself was taking sides in the face of so much suffering.
We are back to business as usual. We have super sized the american dream. And we have exported our emissions to China. And at this late stage we are all in the sacrificial zones, which were the poor communities initially.
The Sand Creek Massacre happened in Nov 29 1864 in CO. That date is showing up once again, and I will be marching with my native American brothers and sisters in Denver to bring to light what John Chivington and John Evans…both Trustees at the university of Denver ,ordered the killing of an estimated 500 natives,manily women and children.

Back in our camper, by the light of the Shabbat candles, I’m musing on this astounding week. We arrived at Standing Rock still flummoxed by election returns, and fixated on daily newscasts out of Washington and New York. To our delight we found no mention of the T-word, no fretful forecasts. That’s because the story here is far more compelling, and the historical context of the Dakota Access Pipeline battle much broader–four hundred years in the making.

This week I witnessed a new culture alive in our country, one that’s vast and growing.

I had pictured Standing Rock as a few tents and a tepee or two. In actuality there are hundreds of tepees, yurts, and easily a thousand tents spreading out as far as the eye can see. Building is going on in every direction; vehicles continue to pour in.

These are folks of all colors, ages, and states, who refuse to buy into the capitalist values that cater to a white majority. Unlike mainstream America, this emerging culture holds to wise leadership at its center, indigenous elders steeped in a long tradition of prayer and ceremony, rather than the cult of self, wealth, and materialism.

Here at Standing Rock I have not seen people walking around mindlessly on their cell phones, snapping up photos, or speaking loudly. There is nothing for sale here and you wont see Standing Rock becoming a commercialized venture any time soon. Anything you might need—food, toiletries, medicine, warm clothes—are available for free at open air dispensaries.

The camp orients around four principles:

We are indigenous centered. That means that those of us who are not native to this land and are not people of color must wake up to our assumptions of white privilege and get a new program. In this place, the elders, women and children are seated first, eat first, speak first. Can we white folks wait patiently? Sit with our questions and brilliant ideas? Listen more than we speak?

We are building a new legacy here. It’s a legacy based upon the wisdom of the elders whose lives are steeped in prayer and ceremony. The frame itself is radically different, not our normal Western causal orientation, but one that is utterly uncynical. The Earth actually is our Mother, the Ancestors do guide us when we pray and listen to them. And most salient: Water is life.

Every person is important and useful. There is much to be done. Whether you pick up garbage or write a blog, cut wood, scrub pots, or go out on a direct action, every act you do is a prayer and all acts are sacred. In this place there is no hierarchy in the realm of work.

Bring it home. What is happening at Standing Rock and so many other places on our despoiled earth is the result of unchecked power and greed. This is a moment to prevent more ruin and repair what has been spoiled. What are the issues alive in your own neighborhood and how is the earth, water, and air needing your help? The work before us is everywhere.

I came to lend support to an isolated battle and found an entire movement here, thousands of people who have found renewed purpose. I am one. Together we stand in solidarity with our native nations—at long last—to defend their inalienable rights in this country and fight for the health and future of our earth, which is threatened by the monetary interests of a few. And there is great sense of hope. As one young Standing Rock native said: As long as we stay united and in prayer there is nothing we cannot accomplish.

Rabbi Tirzah Firestone is an author, a therapist, a member of Tikkun’s editorial advisory board, and founding rabbi of the Congregation Nevei Kodesh in Boulder, Colorado. She serves on the board of T’ruah (formerly Rabbis for Human Rights–North America).

DO watch the movie – AWAKE-Storyline

The film tells the dramatic story of the historic #NODAPL native-led peaceful resistance at the Standing Rock Sioux Reservation in North Dakota, which captured the world’s attention as one of the biggest stories of 2016. Tens of thousands of activists traveled to North Dakota from all over the world to take a stand alongside the “water protectors”– activists opposing construction of the 3.7 billion dollar Dakota Access Pipeline (DAPL). The pipeline is proposed to transport fracked oil from North Dakota’s Bakken oil fields directly underneath the Missouri River on sovereign Lakota land, the only water source for the Standing Rock reservation and the drinking water source for 17 million Americans downstream.
The second day Trump is in office…He signs an executive order to start the pipeline and sends in the national guard to get the protestors off the land. Tents and make shift housing structures were burned to the ground.