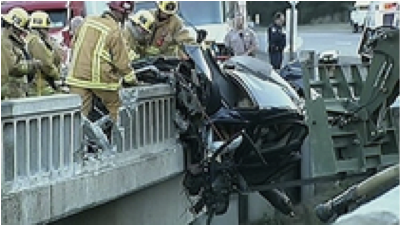 It was the kind of accident that makes you avert your eyes…how could there be any survivors?

It happened last Thursday afternoon on a curved stretch of California Highway 101, north of Santa Barbara. A small car, a BMW sedan, was mangled beyond recognition. The other vehicle, a big-rig truck, landed in ravine 100-feet below. Its driver, Charles Allison, was killed. Police say the truck had rear-ended the car.

“The BMW was then forced into the center concrete wall where the three parties in the BMW became trapped in the vehicle,” said Danny Maher, California Highway Patrol.

The family was trapped and alive, but the shredded vehicle hung precariously as the afternoon wore on over the ravine 100 feet below. First grade teacher, Kelly Lynn Groves, said her daughters were with her; ten-year old Sage and 10-month-old Milo. Seatbelts, airbags and the baby’s car seat had all done their jobs. And dozens of first responders such as fire, rescue, police and hazmat teams, did theirs while facing multiple dangers to themselves, and the car’s occupants.

“Each time we tried to pry her out, the car kept slipping a little bit more,” said Woody Enos, Santa Barbara Fire Department.

On Tuesday, Karen Frankel shared in class this story that she said is a beautiful example of a “Kabbalah Experience.”  So, I googled car crash 101 and the first link I opened was about a car crash on the 101 on February 28, 1999. In that crash, the car went over the edge of the cliff and both parents died. There was a miracle on that day as well, baby Tania, 16 months old, was pulled from the wreck—she had hung upside down in her fastened car seat for 5 hours.

We talked in class about the intersecting of billions of ‘events’ at any moment that lead to life and to death—the miraculous nature of synchronicity, an awareness we develop from seeing the interconnectedness of  what happens in and from our life. The Kabbalah perspective is to enlarge our awareness to not only choices (such as securing babies in car seats) we make, it extends as well to the choices others make; all are providentially guided.  Parallel lines that intersect—one line plummeting to death and the other line lifting to life.

Here is the rest of the story of the rescue of Kelly Lynn, Sage and Milo Groves (the news video is worth watching – click here)

Then there was an amazing stroke of luck. A team of Navy Seabees just happened to come across the scene. In their convoy was a heavy-duty forklift with a telescoping arm. Exactly what was needed!

The rescue workers secured the car underneath with the forklift and were able to stand on the car and extract the Groves from their car.

“Extremely lucky. We were really lucky that they came by,” said Enos.

Luck is known by another name. We call it a Kabbalah Experience.