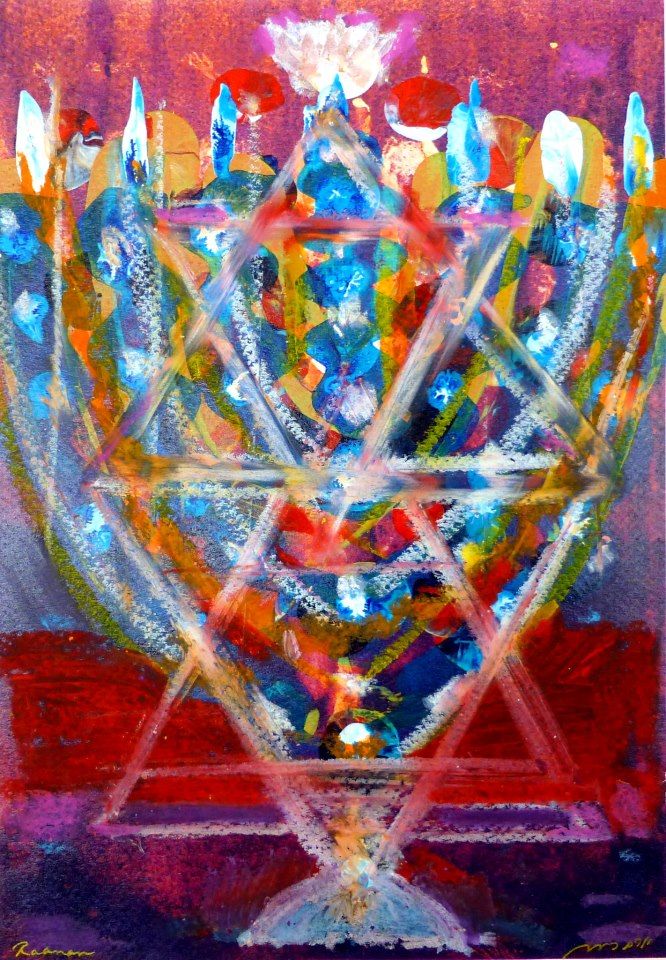 There is a classic argument among the early Rabbis of the 1st century whether to light the Chanukah candles in a descending or ascending order—from eight to one or one to eight. Each opinion has a rationale for their recommendation and the Kabbalists added that while we currently (for the last 2000 years) follow the opinion of ascending in a time of greater consciousness (Messianic times) we will light in a descending order. The principle underlying their point of view is coming to oneness and unity.

What neither candle lighting sequence addresses is how does one keep the light shining on the days following Chanukah (or Christmas or Kwanzaa)? While this is a specific question, it is also a larger question—how does one maintain awareness, a feeling, a passion, a behavior?

Another insight from Kabbalah on the Chanukah lights illuminates a path for maintenance. There is a Kabbalah tradition that the candles should “light themselves” rather than be lit. In order to have this occur materially one brings the flame close to the wick and allows the heat to ignite the wick without directly touching the flame to it (for your and especially your child’s enjoyment try the jumping candle method.

Kabbalah draws a parallel between the candle lighting itself and how we illuminate for others and for ourselves awareness. To seek enlightenment, to think that wisdom is “out there” in someone else’s experience or teaching, no matter how instructive and useful that may be, is not yet igniting the inner flame of one’s own awareness. So when we light candles the flame shines back on our inner desire to shine, it reflects back to us our commitment to be a light in the darkness. That inner igniting can last for more than the days designated for lighting up the dark nights of winter.

Do you remember the flame that was ignited by the first women marches in 2017 across the globe and here in Denver? It was inspiring to be part of 100,000 strong voices gathered to shine a light on gender issues in our city. My neighbor and friend, Sharon Hwang, who is on the leadership team of this year’s Womxn’s March (renamed Womxn) in January is dedicated to maintaining the fire, and with many others, carries the torch forward to insure that the flame of empowerment for both women and men does not flicker or die out.

As indebted as we are to firefighters for extinguishing destructive fires, we are grateful for firekeepers who maintain the flames of justice, equality and dignity. The most special quality of a firekeeper is the ability to inspire others to “light themselves” and the best way for that to happen is for the firekeeper to be internally lit—not just for a short burst of time or holiday season but for the long haul through the darkness.

As I was finishing writing this blog a student came out of class lit up by two of her classmates’ presentations followed by a negative self-reflection on what (paltry presentation) she might offer. I pointed her to her heart with the words: “Present from here.” She lit up again.

very instructive and inspiring. thanks.

When despair grows in me
and I wake in the night at the least sound
in fear of what my life and my children’s lives may be,
I go and lie down where the wood drake
rests in his beauty on the water, and the great heron feeds.
I come into the peace of wild things
who do not tax their lives with forethought
of grief. I come into the presence of still water.
And I feel above me the day-blind stars
waiting for their light. For a time
I rest in the grace of the world, and am free.

What we do not know is that 14,000 homes burned down in the recent CA fires, and 600 people died and went missing.
We have a lot to be grateful for,as the fire fighters were relentless…many of,who were jail inmates paid $1 a day for their earnest efforts.
Jeff Bridges, an actor, directed the movie – Living in the future’s past – as he lost his home in CA to a huge land slide, caused by the earlier fires. Their home was spared from the fires, but in the end, the massive land slides destroyed their home,and it was a miracle that their lives were spared.

“The Contrariness of the Mad Farmer”
BY WENDELL BERRY, SPECIAL CONTRIBUTOR

I am done with apologies. If contrariness is my
inheritance and destiny, so be it. If it is my mission
to go in at exits and come out at entrances, so be it.
I have planted by the stars in defiance of the experts,
and tilled somewhat by incantation and by singing,
and reaped, as I knew, by luck and Heaven’s favor,
in spite of the best advice. If I have been caught
so often laughing at funerals, that was because
I knew the dead were already slipping away,
preparing a comeback, and can I help it?
And if at weddings I have gritted and gnashed
my teeth, it was because I knew where the bridegroom
had sunk his manhood, and knew it would not
be resurrected by a piece of cake. ‘Dance,’ they told me,
and I stood still, and while they stood
quiet in line at the gate of the Kingdom, I danced.
‘Pray,’ they said, and I laughed, covering myself
in the earth’s brightnesses, and then stole off gray
into the midst of a revel, and prayed like an orphan.
When they said, ‘I know my Redeemer liveth,’
I told them, ‘He’s dead.’ And when they told me
‘God is dead,’ I answered, ‘He goes fishing every day
in the Kentucky River. I see Him often.’
When they asked me would I like to contribute
I said no, and when they had collected
more than they needed, I gave them as much as I had.
When they asked me to join them I wouldn’t,
and then went off by myself and did more
than they would have asked. ‘Well, then,’ they said
‘go and organize the International Brotherhood
of Contraries,’ and I said, ‘Did you finish killing
everybody who was against peace?’ So be it.
Going against men, I have heard at times a deep harmony
thrumming in the mixture, and when they ask me what
I say I don’t know. It is not the only or the easiest
way to come to the truth. It is one way.

A Poem on Hope
By Wendell Berry

It is hard to have hope. It is harder as you grow old,
for hope must not depend on feeling good
and there’s the dream of loneliness at absolute midnight.
You also have withdrawn belief in the present reality
of the future, which surely will surprise us,
and hope is harder when it cannot come by prediction
anymore than by wishing. But stop dithering.
The young ask the old to hope. What will you tell them?
Tell them at least what you say to yourself.

Because we have not made our lives to fit
our places, the forests are ruined, the fields, eroded,
the streams polluted, the mountains, overturned. Hope
then to belong to your place by your own knowledge
of what it is that no other place is, and by
your caring for it, as you care for no other place, this
knowledge cannot be taken from you by power or by wealth.
It will stop your ears to the powerful when they ask
for your faith, and to the wealthy when they ask for your land
and your work. Be still and listen to the voices that belong
to the stream banks and the trees and the open fields.

“Terrible things are happening outside. At any time of night and day, poor helpless people are being dragged out of their homes. … Families are torn apart; men, women and children are separated. Children come home from school to find that their parents have disappeared. … Everyone is scared. … As for us, we’re quite fortunate. Luckier than millions of people. It’s quiet and safe here, and we’re using our money to buy food. We’re so selfish that we talk about “after the war” and look forward to new clothes and shoes.” Anne Frank, January 13, 1943.