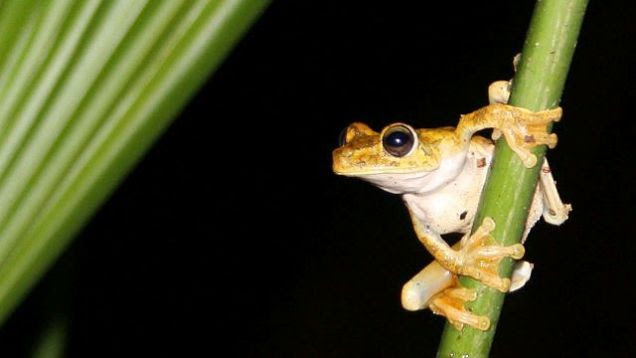 Who has not heard this one: If you put a frog in boiling water it will jump out, but if you gradually increase the temperature of the water it will let itself be boiled.

Happens to not be factual. Frogs indeed jump when the temperature of the water becomes too warm (well before it reaches boiling). Frogs are unable to jump if placed in boiling water (they die).

While this frog tale does not pass scientific scrutiny the analogy survives. It is a warning to humans to be smarter than frogs and recognize the early warning signs that threaten our safety and survival. Is it dismaying to learn that the instinct of a frog may be “smarter” than our sophisticated human intelligence?

Case in point: The most recently released report by the United Nations’ Intergovernmental Panel on Climate Change (released yesterday) warns that if the world continues (this is the wording used in the article—interesting that the author uses this euphemism—world instead of humans) to spew greenhouse gases at its accelerating rate, by mid-century temperatures will increase by about another 3.6 degrees Fahrenheit (2 degrees Celsius) compared to temperatures from 1986 to 2005. And by the end of the century, that scenario will bring temperatures that are about 6.7 degrees warmer (3.7 degrees Celsius).

Frogs would find this alarming and instinctually jump! But John Christy of the University of Alabama, Huntsville, is skeptical of the claim that global warming is a major problem. He says people will do OK: “Humans are clever. We shall adapt to whatever happens.”

A minority opinion such as his would not be cause for alarm except that Dr. Christy has served as Lead Author (2001) for the U.N. reports by the Intergovernmental Panel on Climate Change. Dr. John R. Christy is the Distinguished Professor of Atmospheric Science and Director of the Earth System Science Center at the University of Alabama in Huntsville. He began studying global climate issues in 1987.

Today is the first day of the month of Elul, a month of preparation for the coming New Year. It is customary to blow the Shofar (ram’s horn) each morning to awaken ourselves to change. It is a time to realize what hot water we have gotten ourselves into and are immersed in—and to not use our cleverness to out-smart our own best interests.

Case in point: I have shared in class this summer my awakening to my personal risk for developing diabetes. My father died from diabetic complications at age 61. I had been gaining weight and being more sedentary for the past few years and my blood sugars had begun to increase—but ever so slightly. My older sister had already changed her eating and exercise habits a few years ago and had kindly sent me an article on the glycemic index of foods. The temperature of the water though had not gotten hot enough. Then my blood sugars came back this past May with an asterisk—pre-diabetic. It was recommended that I start medication—I suggested that I first try changing my diet and start to exercise more. My doctor set a weight loss goal for the year. He meant a year—I will reach that goal well before Rosh Hashanah.

What have I done? I am eating as much as I did before, just eating very differently. As part of my previous wake up routine—I used to have coffee and a muffin (29g of sugar)—now I am awake and have cottage cheese (4g of sugar) with my coffee. I am “carbing” my appetite; far less sugar, far less carbs as part of my overall diet.

So what does intelligence have to do with it? One might argue that denial is a form of stupidity. I would argue that it comes in many forms—some which would appear quite intelligent. Here is one “intelligent” denial: “I am going to die anyway so I might as well enjoy myself.” It is the same logic that humans may likely adopt (rather than adapt to or change before it is really too late) in facing higher and higher global warming temperatures—I might as well enjoy my fluorocarbon and carbon dioxide producing products and ignore the carbon footprint of the foods I eat.

The earth’s blood is pre-diabetic. A frog would have jumped already. Let us hope that the call of the Shofar will be heeded by us and a growing aware minority. We can only save the majority if a minority of people commit to save our planet and humanity and hope that it goes viral. We don’t have till next year, we must act now.

P.S. I will continue this theme and apply it as well to spiritual awakening in preparation for the Jewish New Year holidays. Also, if you would like to attend a small, intimate “service” for the holidays please join Kabbalah Experience for prayer, meditation and study for the first day of Rosh Hashanah (Thursday September 25th and Yom Kippur eve and day (October 3rd and 4th) in Lowry.