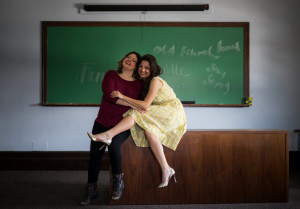 Jonesborough, Tennessee is a sleepy bed & breakfast town that every year hosts an international festival of story tellers. People sit under huge tents and in a revivalist fashion do what small children the world over enjoy—a good story.

I have a story from Jonesborough—not one I heard, one that I experienced. It has to do with saw-toothed grain beetles in my cereal but I am jumping ahead. Back when I was a young man, working in Family Medicine, I would visit my colleagues in Johnson City, the university town up the road to devise training tapes for family interviewing. We would stay at the Hawley House—the oldest B&B in town. When our entourage from Colorado arrived for our return visit the following year, our host, a woman known miles around for the best bacon & eggs points to me and says—“You, you I need to talk to.” I thought she may have figured out for this visit how to get kosher food for me; instead she had a story to tell about the embarrassing breakfast incident the year before.

You see, when I came to visit the first time I wasn’t expecting to be fed, I brought my own provisions, but the matron of the house wanted me to be her guest so she had a basketful of cereal boxes from which to choose for breakfast. As I poured out the cereal I noticed something moving—grain beetles had infested the raisin bran. Concerned and conciliatory, she removed the whole basket of cereal boxes and begged for my forgiveness. For me it was not a memorable event—there was ample fresh fruit to supplement the food I had brought along with me.

What I did not know, and what the matron had herself forgotten was the diamond engagement ring that she had secreted away inside one of those cereal boxes—the ring her son had given to his fiancé—the ring, which upon the breaking off the engagement was returned to her by her son’s fiancé on a Friday. Not having time to place the ring in a more secure place, she fell upon the idea of hiding it in a cereal box—I arrived that Sunday and the rest is history. The diamond ring found its way to the town dump.

There is much more to the story but that is for a telling at a story festival. Suffice to say: the story is always there—many times though we don’t get to hear the “rest of the story.” I have not been back to Jonesborough since those visits over 20 years ago—BTW, the couple re-united and asked for the ring back—a story that needed to be revealed over an uncomfortable breakfast meeting between a son, his fiancé and her future mother-in-law.
Did the couple stay together, do they have children? Did a man, combing through mounds of garbage come across a diamond ring which, through permutations of circumstance, now rests upon the hand of a young woman, born in Charleston, South Carolina, the daughter of that would be couple from Jonesborough?

Choose to be in the wonder of how intertwined our stories are—and consider the following story of sisters, born a year apart and sent off for adoption to different families, meeting for the first time in a creative writing class 30 years later
Lizzie Valverde and Katy Olson were strangers when they enrolled at Columbia University a few years ago. Ms. Valverde is from New Jersey, while Ms. Olson had grown up mostly in Florida and Iowa.

Their lives crossed in January 2013, on the first day of a writing class, when they took part in one of those familiar around-the-table introductions that by the end had led them to a stunning realization.

The two women had come to Columbia to learn the finer points of storytelling and wound up in the middle of a doozy: an intertwined tale of their own that they say they could never have conjured.

Their shared story line — a chance reunion three decades after being born to the same troubled mother in Florida and then raised by adoptive families in different parts of the country — has been knitted together by years of curiosity on both women’s parts about their origins.