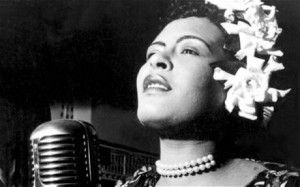 There is a confederacy growing in the United States whose unified strength will not only lower that flag but have it removed from South Carolina and other southern states—the flag being the emblem of prejudicial states of mind. Hate is a very active energy. If the new confederacy is to overcome hatred it must remain vigilant to what “will not fly” on flagpoles, in police behavior and in the everyday interactions on the streets, in the workplace and in the schools. This new confederacy is an America that is awakening to the need to expose first and then heal the divides that are racial, sexual and religious in this country.

Time Magazine designated Strange Fruit, written by Abel Meeropol and sung by Billie Holiday as the “Song of the 20th Century.” What is amazing is that it was not a popular song in its time and may never have been recorded if not for the courage of Milt Gabler, who agreed to release it on his Commodore Records label (I first heard of Gabler and this song from Billy Crystal who was recounting his father and Uncle Milt’s record company).

Meeropol’s Strange Fruit was inspired by a photo of the lynching of two black men in Marion, Indiana (the song’s lyrics are below). Billie Holiday’s vocals will reverberate in Charleston this week where the 8 Bible study group members and their pastor, Clementa Pinckeny, will be buried. These men and women of the Emanuel Church, their skin color black, were not lynched but they share in the deaths of so many Americans of color, they were murdered because they are seen as foreign, and what is foreign is seen as dangerous.

What is unspoken about the tragedy in Charleston is that the murderer sat amongst his intended victims sharing in their Bible study. He was welcomed into their midst, welcomed by Pastor Pinckeny to join them. He sat with them for an hour. According to one report the murderer hesitated to carry out his plan as he absorbed the Bible study. Pastor Pinckeny and the Bible study group at Emanuel welcomed the stranger. They did not assume this foreigner was dangerous. They were wrong in this instance—but not all “white” people are dangerous and not all “black” people are dangerous.

If a single photo of a lynching can inspire the song of the (past) century what song can hours of recent videotape inspire this century? Better yet, what will be the words of a new version of America the Beautiful, for what makes a nation more beautiful than the harmonious possibility of a land that is truly “different together” above the fruited plain.

Blood on the leaves and blood at the root,

Pastoral scene of the gallant South

The bulging eyes and the twisted mouth

Scent of magnolia sweet and fresh

And the sudden smell of brining flesh

Here is a fruit for the crows to pluck,

For the rain to gather, for the wind to suck,

For the sun to rot, for a tree to drop,

Here is a strange and bitter crop.