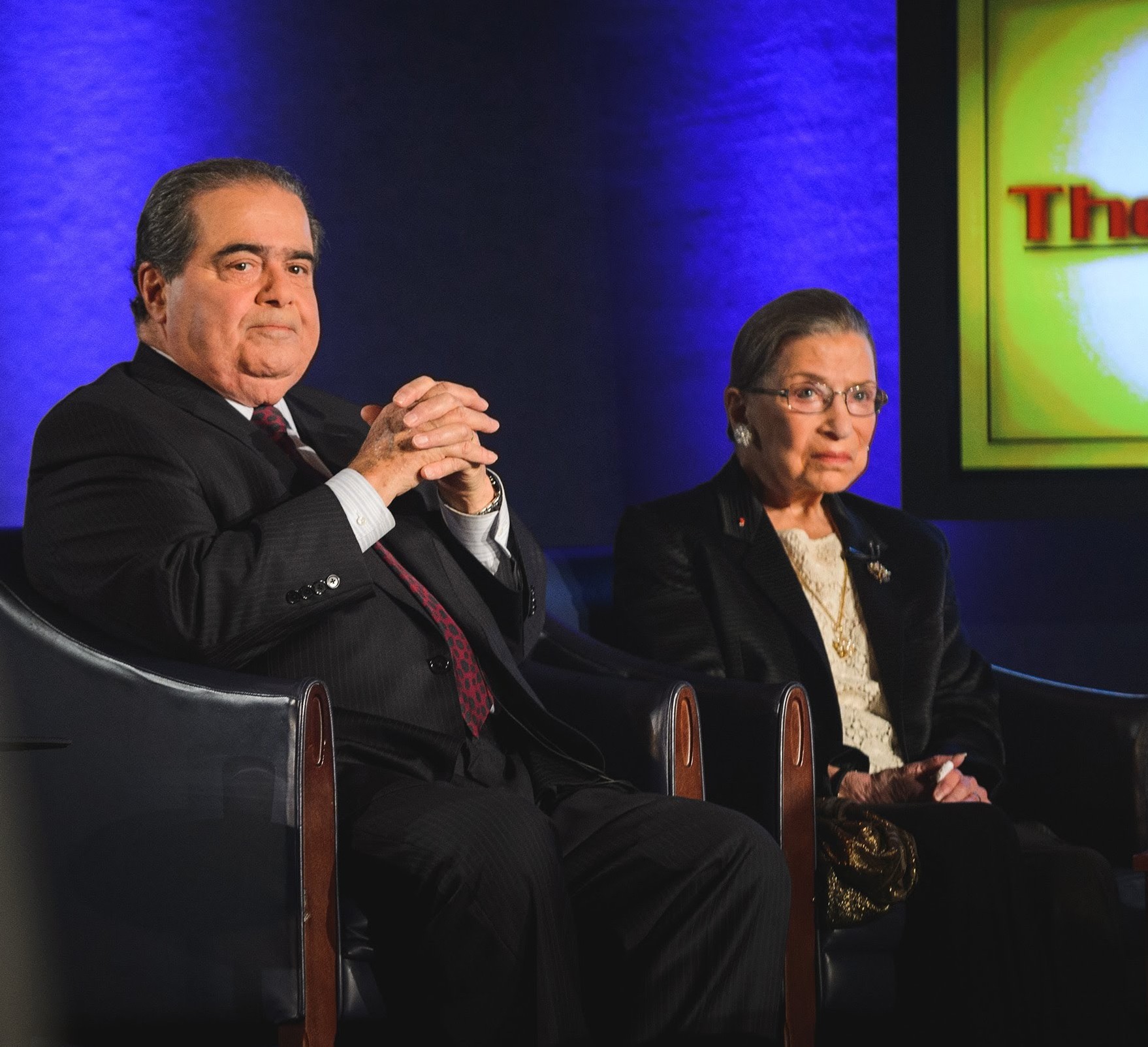 Ruth Bader Ginsburg and Elena Kagan agree 93% of the time on cases brought before the U.S. Supreme Court (the only higher concordance between Supreme Court justices is Kagan and Sonia Sotomayor at 94%).  While Ginsburg and Kagan, liberal women justices, have agreed with Justice Antonin Scalia far less (70% and 74% respectively) they were in total agreement when it comes to their admiration of their fellow judge who died this past week—they consider Scalia not only a great legal mind, they consider him a friend.  Perhaps it is their common New York backgrounds: Kagan is from Manhattan, Scalia from Queens and Ginsburg from Brooklyn (Sotomayor is the other New Yorker, hailing from the Bronx) that paved the way for colleagues to be friends—but my guess is that Scalia—the common denominator and the tenured justice—welcomed both women to the bench and into his life. It is well known that Scalia, knowing the newly elected President Obama would appoint a liberal minded judge, asked for a “smart one” and specified Elena Kagan.

I was about to write the “unlikely” friendship between Scalia and Ginsburg, but if one grasps the importance of holding opposites—their friendship is more easily understood.  Here were colleagues who felt that listening to another, to their dissenting opinion, helped clarify their own. Justice Ginsburg, reflecting on the death of her friend, will miss his dissents which inevitably would “nail all the weak spots” and give her what she needed to strengthen her argument.

Justice Kagan, in an interview at the Aspen Institute, revealed that she went hunting with Justice Scalia and killed a deer. Kagan and Scalia were not just hunting buddies—they also enjoyed a deep friendship. Here is the back story she shared:

“During confirmations you go around from office to office, from chamber to chamber.  I met with about 80 senators individually and quite a lot of them, both Republicans and Democrats, ask you about your views on the Second Amendment. But because you don’t say anything about your views on anything, they ask you, well, they try to figure out, what your views on the Second Amendment are likely to be and they’ll ask, ‘Well, have you ever held a gun? Have you ever gone hunting? Do you know anybody who hunts?’  I grew up on the Upper West Side of Manhattan and this was not something we really did, you know, and so I kept on having these conversations where I would say no and no and no and finally to one set of these questions, I said, ‘You know senator,’ I said, ‘if you were to invite me hunting, I would really love to go.’ And this look of total horror passed over his face. You know, ‘Has this woman just invited herself to go hunting with me?’ And I thought, I’ve gone too far, and then I sort of pulled back and I said, ‘I didn’t really mean to invite myself, but I’ll tell you what, if I am lucky enough to be confirmed, I will ask Justice Scalia to take me hunting.’  And I went to Justice Scalia when I got onto the court, and I said, ‘This is the only promise I made during my entire confirmation proceedings, so you have to help me fulfill it.’ And he thought it was hilarious. He thought it was a total crackup. And so, there you go.”

For the moment, as Justice Scalia’s body lays in repose, we are best served by reflecting on the vacancy felt in his friends’ and families’ hearts and not on the seat left vacant by his death. For our nation, we are better served by reflecting on the vacancy of a man who had a most welcoming dissenting opinion: you can be friends with those you disagree with, good friends. That is a dissent worthy of the highest court of opinion in our nation.

I enjoyed this post. I love the notion and want to hear more about how anothers’ opinion helps us to clarify our own. Perhaps it is ‘easier’ for these Justices to happily disagree than it is for, say, the average husband and wife, but i love how this example highlights the notion. Its rare that in daily life we have the opportunity to really hear (read: deeply listen) to anothers’ point of view without the distraction of defending our own points. I like imaging myself into a future time when I can sit, like a judge, and form my own dissenting opinion without the murkiness of personal defensiveness. I am going to try to embody that next time (which is probably later today, haha)
Thanks.