The Rhyme of the Ancient Mime 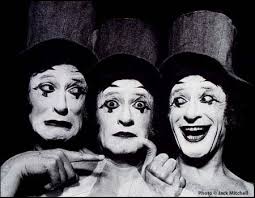 As I was cleaning out my emails this week I came across one sent to me by Louann Miller months ago that I had glanced at but had not read through. It was a short biography on Marcel Marceau that included little known facts about him; the most poignant for me was that he instructed Jewish children, hiding from the Nazis in occupied France, to refrain from talking and use mime gestures to communicate. Marceau, whose surname before the war was Mangel, took his last breath on Yom Kippur 2007. Who knows when he spoke his last word—his art was silent communication.

Today is Tu B’Shevat, the 15th day of the month of Shevat. It is the Jewish equivalent of Ground Hog Day—we are anticipating the renewal of spring by celebrating that the sap is already visible on trees. It may be the “dead” of winter but to those who are attuned to the unseen—spring is already present. The Kabbalists of Tzfat, masters of the unseen, created a ritual seder for this holiday that has now been practiced for some 500 years. It includes drinking (4 cups of) wine and eating fruits and nuts. The seder (which is Hebrew for following a proscribed order) ascends from fruits and nuts covered with shells, such as almonds and pomegranates, to fruits with pits, such as dates and olives and then fruits without any shells or (non-edible) pits such as figs and apples.

I would like to suggest a fresh approach to the Tu B’Shevat seder:

Set the table. Light candles. Place cell phones and all electronic devises far from where you are sitting down to eat. Take a few deep breaths. Enter silence. No talking. Say your prayers over the wine, food, nuts and fruits silently and slowly. Peel or crack. Bite. Chew. If you are with someone else communicate only through pantomime. Remain in silence. Reflect on what words you would have liked to say out loud. Practice saying them without words. Reflect on the silence of the avocado or the concealment of the walnut—approach them with the awe and respect due them for participating in your seder. Open them the way they would like to be opened so that they can express themselves as fully as possible. Reflect on the wine in the following manner (or another to your choosing):

For those of us who are not people of few words the practice of silence, especially when eating, fosters us to listen a little deeper—to the food we eat, to others and to ourselves. And who knows, you may want those words left unspoken today for a later day, your final words before your last breath.

P.S. (or Pss) If you are a shy person you might consider coming out of your shell or quieting down the pit in your stomach and using the Tu B’Shevat seder as a time to speak up.