Sand in Your Pocket 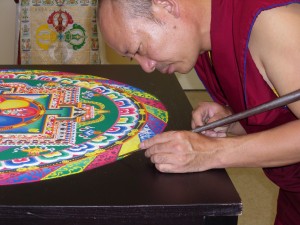 Yesterday on the way to teaching class my cell phone rang. My policy is to not answer the phone when I don’t recognize the number. I ignored it—my policy that is–to encounter a woman’s voice on the line. In the recesses of my cortex connected to voice recognition the name came to my vocal chords. She was asking Dr. Sanders? And I instinctively said Barb _________? As her first and last name came out I wondered not so much why she was calling me but where did that name come from in my consciousness. Did I get it right? She did not correct me and then told me that it took her months to find my number.

I have not spoken to Barbara since the last century. With her voice came her face, came back the context of how and where I knew her and then a flood of associations from our working together, to her family and to her church. She was calling for some advice.

A SPOTLIGHT reveals RYAN BINGHAM standing at a PODIUM.

He unzips a BACKPACK and sets it down beside him.

RYAN
How much does your life weigh?

Ryan pauses to let us consider this.

RYAN (CONT’D)
Imagine for a second that you’re
carrying a backpack… I want you
to feel the straps on your
shoulders… You feel them?
(gives us a beat)
Now, I want you to pack it with all
the stuff you have in your life.
Start with the little things. The
stuff in drawers and on shelves.
The collectables and knick-knacks.
Feel the weight as it adds up. Now,
start adding the larger stuff. Your
clothes, table top appliances,
lamps, linens, your TV. That
backpack should be getting pretty
heavy at this point – Go Bigger.
Your couch, your bed, your kitchen
table. Stuff it all in… Your car,
get it in there… Your home,
whether you have a studio apartment
or a two story house, I want you to
stuff it into that backpack.

Ryan takes a beat to let the weight sink in.

We hear people around us chuckling. Ryan smiles. Reveal

The few dozen people seem to be visualizing as told.

RYAN (CONT’D)
Kinda hard, isn’t it? This is what
we do to ourselves on a daily
basis. We weigh ourselves down
until we can’t even move. And make
no mistake – Moving is living.

RYAN (CONT’D)
Now, I’m going to set your backpack
on fire. What do you want to take
out of it? Photos? Photos are for
people who can’t remember. Drink
some gingko and let the photos
burn. In fact let everything burn
and imagine waking up tomorrow with
nothing.

It’s kind of exhilarating isn’t it?
That is how I approach every day.

Ryan Bingham is the protagonist in the film Up in the Air who though the course of the film winds up with a heavier and for him, at times cumbersome backpack. The heavier and more cumbersome it becomes the harder it is for him to maintain his philosophy. The film is brilliant in challenging us to not just look at our baggage—it is a meditation on permanence and impermanence.

Consider the art of sand mandalas—this most intricate form of meditative art that once complete is dusted away. I watched a few videos of monks creating beautiful works of sand art and as the monks stepped away people would come over and take the sand. Would you put a grain of sand from one of these magnificent mandalas in your backpack? It would not take up much room. It would be far heavier than the pearl of wisdom called impermanence.

We cannot wake up with nothing. We have many grains of sand. There are a million grains of sand in my mind and in yours, each with a different quality of voice, or hue of color, most are not just facts—they are connected to a relationship. Those grains of sand, the Barbs of the world, when they resurface, give pause to turn a grain of sand into a pearl. The millions of pearls though are no more permanent than the grains of sand, even if we double-knot the strands. While they are not permanent, they are still precious, for the joy in the making and the joy of the moment. Carry that with you at all times.